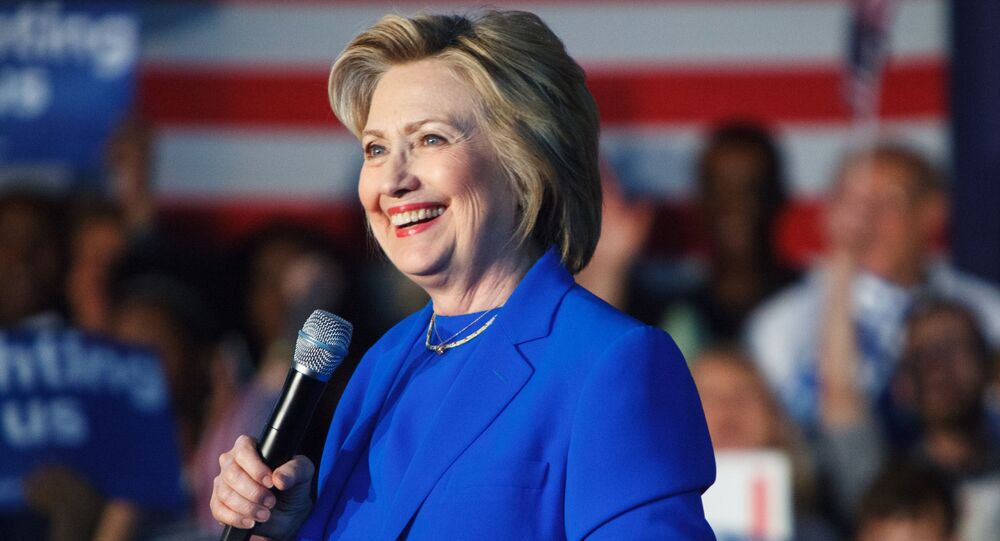 Earlier this week, a picture surfaced showing a Jeffrey Epstein accuser, Chauntae Davies, giving a massage to Bill Clinton, casting a further shadow over the ex-president's relationship with the late child sexual abuser, who is known to have mingled with big shots from the world of politics and business.

No sooner had the ado over a picture of Bill Clinton receiving a neck massage from one of Jeffrey Epstein's accusers calmed down, than a new compromising detail sank in – that ex-Secretary of State Hillary Clinton "gifted" Alexander Djerassi, the nephew of Epstein's pal and ex-partner Ghislaine Maxwell, a position within her department, as reported by OK! Magazine.

The young man was reportedly just out of college at the time and enjoyed "special treatment" from Hillary.

The news has quickly drawn a storm online, attracting

"THIS PARTY IS SO f****ed", one disappointed user pointed out, while some suggested it could be an act of salvation:

"Maybe she was rescuing him from the child prostitution and human trafficking family business that Maxwell was offering him", one netizen assumed.

"How Hillary's campaign will survive this.....", another opted for a bit of irony.

Quite a few reacted with obvious distrust:

The celebrity tabloid OK! Magazine is reporting that Hillary Clinton "gifted" Maxwell’s nephew, Alexander Djerassi, a prominent position within her department when he was just out of college and gave him "special treatment"https://t.co/6ySvKPoIci

you know what's weird? lots of people are nephews of someone.

"How did Kushner, Ivanka, and all who paid for cabinet positions in current admin react?", another queried.

"He was not a pimp for Epstein last I heard. Move on", a  hird came up with his view of why Maxwell's relative found himself a job.

On Tuesday, just before the virtual Democratic National Convention that formally announced Joe Biden as Donald Trump’s election rival, the Daily Mail published photos of ex-President Clinton being massaged by Chauntae Davies, one of Jeffrey Epstein's alleged sex slaves, during a stopover on his infamous 2002 trip to Africa with the late convicted paedophile.

According to Davies, Epstein's purported "pimp" Maxwell was present for the voyage and encouraged Davies to give Clinton the massage.

"Would you mind giving it a crack?", Clinton allegedly asked Davies, who claimed he was a "complete gentleman" during the trip. Clinton, who was earlier also reported to have flown several times on Epstein's private jet the "Lolita Express", has denied any wrongdoing or knowledge about Epstein's involvement in child sexual abuse.

© REUTERS / JANE ROSENBERG
Ghislaine Maxwell appears via video link during her arraignment hearing where she was denied bail for her role aiding Jeffrey Epstein to recruit and eventually abuse of minor girls, in Manhattan Federal Court, in the Manhattan borough of New York City, New York, U.S. July 14, 2020 in this courtroom sketch

The 58-year-old British socialite who has reportedly been trying hard to avoid the limelight since the first allegations emerged against Epstein, was arrested in her New Hampshire hideaway on 2 July and charged with recruiting, grooming, and ultimately abusing three alleged victims, including a 14-year-old, as well as perjury during previous testimonies.

The daughter of British media mogul Robert Maxwell has since pleaded not guilty, and asked for bail, but the request was declined with prosecutors citing "a high flight risk".  If found guilty, she could face up to 35 years behind bars. The court proceedings are slated to start in July of next year.

She is currently in a Brooklyn prison, with her legal team referring to her pre-trial treatment as "onerous", insisting she has difficulties in studying her court case and designing her line of defence while being surveilled by numerous guards and psychologists 24 hours a day.