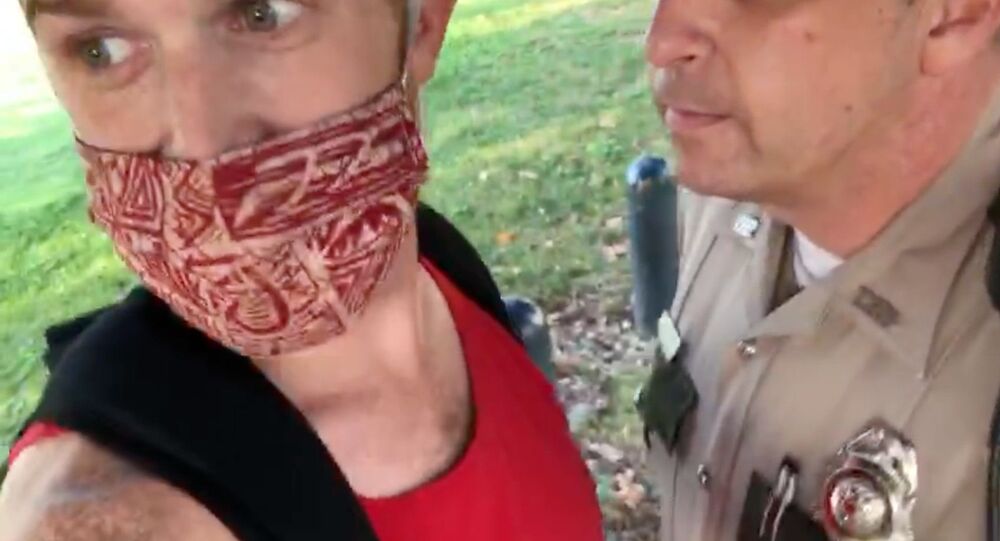 A state trooper with the Tennessee Highway Patrol came under investigation this week after cellphone footage documented the law enforcement official appearing to rip a mask off a local resident who was filming a traffic stop.

The incident took place Monday near the Tennessee State Capitol building in Nashville and involved local resident Andrew Golden and Trooper Harvey Briggs, who at the time of the altercation was manning a nearby entrance post.

Video shows that the confrontation between the pair started when Golden began to film an ongoing traffic stop by two other state troopers, a move which prompted Briggs to yell out for Golden to not interfere. Golden told the Tennessean that he was between 10 and 15 feet away from the scene at the time.

Golden’s response, “I’m filming, and I’m on the f**king sidewalk,” immediately leads to a stern rebuke from Briggs and ultimately sees the officer walk over to the local after a few more verbal exchanges.

“Don’t use that language again,” Briggs is heard saying moments before walking up to Golden. “Don’t talk to me like that. I’m telling you, I prefer better language than that out of you.”

Once the two are face-to-face, Briggs reiterates to Golden that he must not impede the traffic stop, and that if he does, “we’re going to have an arrest.”

“When you address me, you use less colorful language,” Briggs continues, stating that he does not “appreciate” such language. The trooper is filmed with his hand on his gun holster throughout the encounter.

At one point in the recording, the maskless Briggs brings his face close to Golden’s face, which subsequently prompts an outraged Golden to say, “You’re not wearing a mask and you’re right up in my face?”

Golden eventually turns the camera around to show Briggs’ stance, all while telling the fellow troopers on the scene, “What the f**k is your friend doing over here?” Within seconds of Golden’s comments, Briggs appears to unexpectedly pull off the filmer’s mask.

Although the actual act isn’t captured on camera, the sounds of an elastic band popping can be heard before Golden yells out and shows his mask lying on the ground near a tree.

“What the f**k? You gonna do something about that?” Golden asks the nearby troopers. “He just ripped a f**king mask off my face.”

The two troopers involved in the traffic stop do not intervene, and the remainder of the recording captures Briggs denying that he forcefully removed Golden’s mask. “Oh, come on. I'm tired of you people making stuff up,” Briggs is heard saying before the video cuts off.

Since the Monday confrontation, Golden has filed a complaint against the trooper with the Tennessee Board of Professional Responsibility. Additionally, the Volunteer State’s Department of Safety and Homeland Security is investigating information regarding the Monday incident.

Golden told tabloid outlet TMZ on Wednesday that he has recently started to look into getting legal representation, as he is considering pressing charges over the matter. He further indicated that Briggs was in clear violation of Nashville’s mask ordinance, which went into effect in late June, and that the trooper should at least be reprimanded for the infraction.

Help Thy Neighbour: Church in Tennessee Donates $12,500 to Help Local Businesses During Pandemic