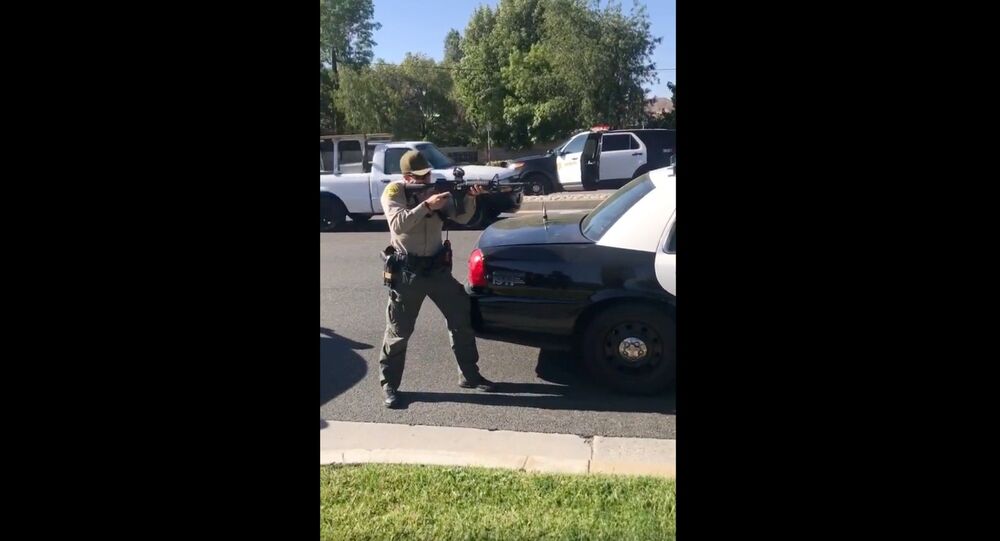 Law enforcement officials with California’s Los Angeles County Sheriff’s Department (LASD) recently came under fire after cellphone footage surfaced showing officers drawing their firearms on teenagers who had been attacked by a knife-wielding man moments prior.

The August 7 incident, which unfolded at a bus stop in the Golden State’s Santa Clarita area, prompted 911 calls by concerned locals after an individual was spotted chasing three teenagers with a sharp object. It was later determined that the attacker pulled a knife and repeatedly tried to strike the teens after they rejected his inquiry about illicit drugs. In turn, the teens used their skateboards as shields.

Video of the events that followed the initial attack against the teens picks up with the attacker long gone and the teenagers being held at gunpoint by several LASD deputies, one of whom is filmed pointing a department-issued assault rifle at the youths immediately after jumping out of his police cruiser.

With more than five officers arriving at the scene, a small crowd of people converged near the bus stop to inform the deputies that the teens were the ones who were attacked, and that the suspect was elsewhere.

“They didn’t even do nothing. This is bulls**t. This is bulls**t,” the individual continues to yell out among the growing group of locals trying to redirect the attention of the cops toward locating the attacker. “[The cops] don’t give a f**k.”

“They’re not even resisting,” another person is overheard as another local urges the targeted teenagers to remain with their “hands up.” At this point, one by one, all three teens are taken into custody.

The 11-minute video, which was reshared on Instagram by Tammi Collins, whose 16-year-old son was one of the arrested minors, also captures multiple people telling the teens to not answer any questions from the police until their parent or guardian is present.

Collins indicated in her video post that the questionable police response came after “one” 911 caller told authorities that “two Black guys are attacking a homeless guy.” The individual who attacked the teens was reported as being a homeless, Hispanic man.

“This is something my son and his friends will never forget,” Collins wrote. “I’m still wonder[ing] how will I ever help my son recover from this traumatic experience.”

Although the three teens were released from the squad cars without charges roughly 30 minutes after being detained, it’s still unclear whether the unidentified attacker was ever apprehended. At one point in the video recording, a deputy is heard saying that he was “pretty sure” an officer had found the attacker.

Los Angeles County Sheriff Alex Villanueva addressed the matter on Monday, saying via a videotaped statement that the officers were responding to a “felony assault” report, but that he has “concerns regarding the tactics employed” by his department’s personnel. Villanueva also noted in the brief, 21-second video that an investigation into the encounter is ongoing.

Robert Brown, the lawyer representing the Collins family, told the Times that he is looking into the incident for a possible lawsuit, however, no decision has been made yet on that front. “I just can’t believe that the only way to handle this was to approach it with guns drawn,” he said.

This latest incident comes as several investigations were recently initiated against Villanueva’s police force after allegations surfaced in a legal claim of a violent gang within the department. The June 23 claim alleged that a group known as “The Executioners” controlled the ins and outs of a patrol station in the Compton area and would often retaliate against officers for stepping out of line.