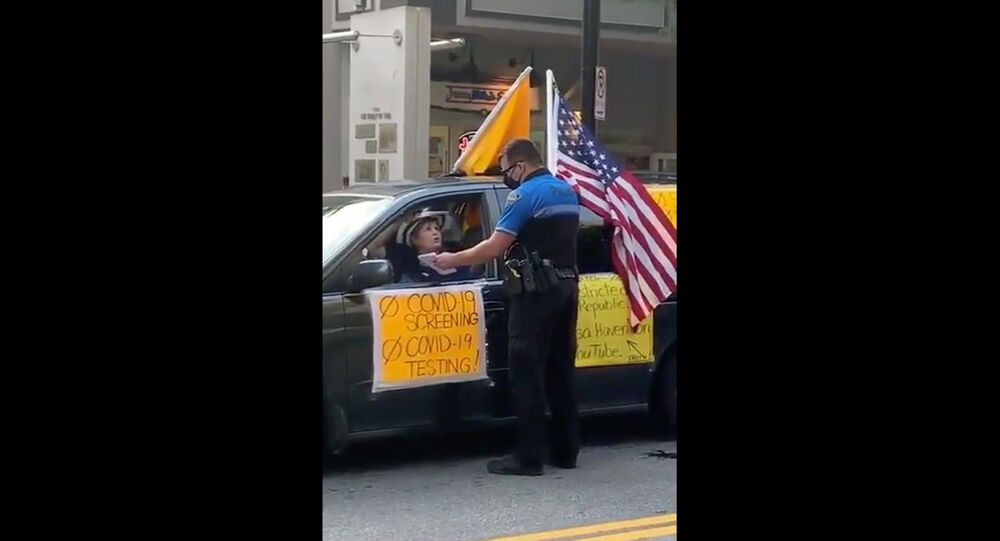 An unidentified woman driving through the streets of Greenville, South Carolina, recently turned some heads when she proclaimed the southern city was “communist” after a law enforcement official cited her for an anti-vaccination poster taped to her vehicle’s rear window.

Video of the interaction begins with an officer from South Carolina’s Greenville City Police Department already engaging the driver of a minivan, who is heard demanding the officer’s badge number.

It’s worth noting that the vehicle itself is decorated with various posters noting the woman’s stance against COVID-19 screenings and testings and is also fitted with two flags, one of which is the American flag.

Seconds after the officer is heard telling the individual that “there is no reason for you to get upset,” she immediately responds, “Oh, no reason to get upset ‘cause we’re living in communist Greenville, South Carolina?”

“I am not disorderly. I have freedom of speech. You’re being disorderly,” she continued. “I was peaceful. You take a couple of deep breaths and put your mask on the ground. You need the breaths with your mask.”

Video shows that the unidentified woman eventually turns her attention to the individual filming the incident, reading aloud the police officer’s badge number and noting that the officer is “charging me with an anti-vaccine [poster] in my [rear] window.”

“[The officer] says it obstructs my view, but there are work vans you can’t see out of [through the back],” she notes, ultimately suggesting that the officer should cite such work vans for safety hazards.

At one point in the recording, the filmer cuts off the woman and tells her that “no one cares. You’re annoying.”

However, the woman ignores the remarks and turns her ire back on the officer.

“Jesus is gonna be more powerful than you,” she’s heard saying. “I’m on my last leg! Citation [is] 87 bucks or my license is suspended? I'll see you in court [officer]. I'll pray for you in the meantime.”

The video cuts off with the officer walking back to his patrol cruiser and the filmer yelling out to the woman that she’s “going to f**king lose [in court].”

Little is known regarding the traffic stop or whether the woman did indeed remove the poster from her rear window before driving away from the scene.

Most recent figures released by the Palmetto State’s Department of Health and Environmental Control indicate that the state has confirmed a total of 99,713 novel coronavirus cases, of which 1,011 were confirmed Saturday. Additionally, with over 840,000 tests having been conducted throughout the state, health officials noted the state has a 12.9% positivity test rate.

Of those confirmed new COVID-19 cases in the state, 97 were recorded in the city of Greenville. Overall, Greenville has confirmed over 10,000 cases.