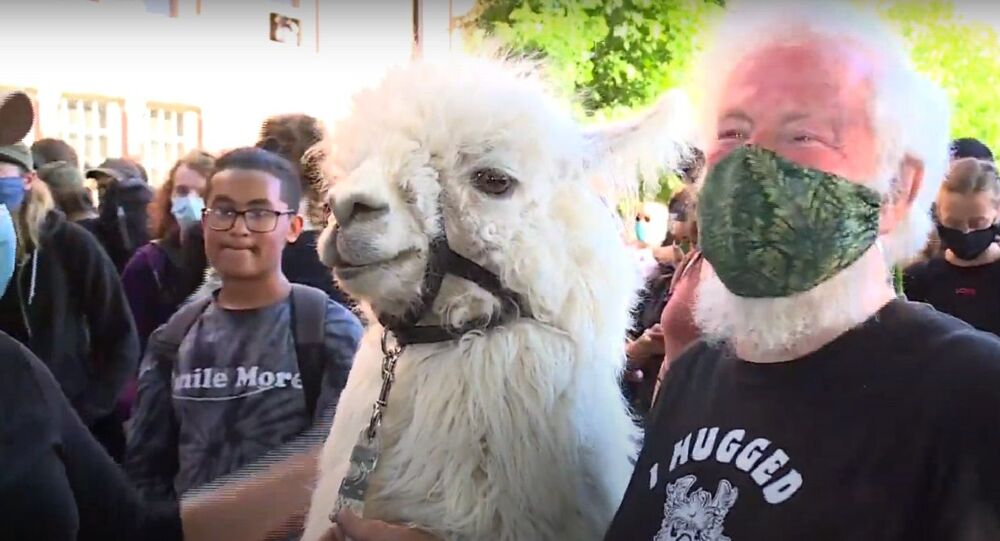 ‘Caesar the No Drama Llama’ Eases Tensions in Portland

The protests in Portland follow weeks of rallies against police brutality and racism that erupted in US cities, including Portland, after the death of an African-American man, George Floyd, in police custody on 25 May.

A llama named Caesar, who works as a therapy animal and "llamactivist", has participated in the Portland protests, The Washington Post reported.

Larry McCool, a caretaker who lives in Jefferson, Oregon, brought his llama, Caesar, to the rallies to serve as a therapy animal. Protesters have been lining up to receive emotional support hugs at the demonstrations and other places where Caesar has showed up.

Photos of the celebrity llama have emerged on social media platforms.

Caesar the "No Drama Llama" and his caretaker, Larry McCool, have been marching in Portland Black Lives Matter protests and he's been a calming influence on both demonstrators and the police. pic.twitter.com/lxZVD0mlFX

​"I don’t care how big, how staunch, how intense that somebody is — it could be a big marcher in total riot gear, and he will come up and give Caesar a big hug. It’s all I can do to just keep him from snuggling", Larry McCool said.

Llamas are known for being very friendly animals, well-socialised, and pleasant to be around, as they are herd animals.

The rallies in Portland follow weeks of protests against police brutality and racism that erupted in the US cities after the death of African-American man George Floyd in police custody on 25 May. However, many of the protests have turned into riots replete with violence against police officers and civilians, as well as acts of vandalism, arson, and looting.