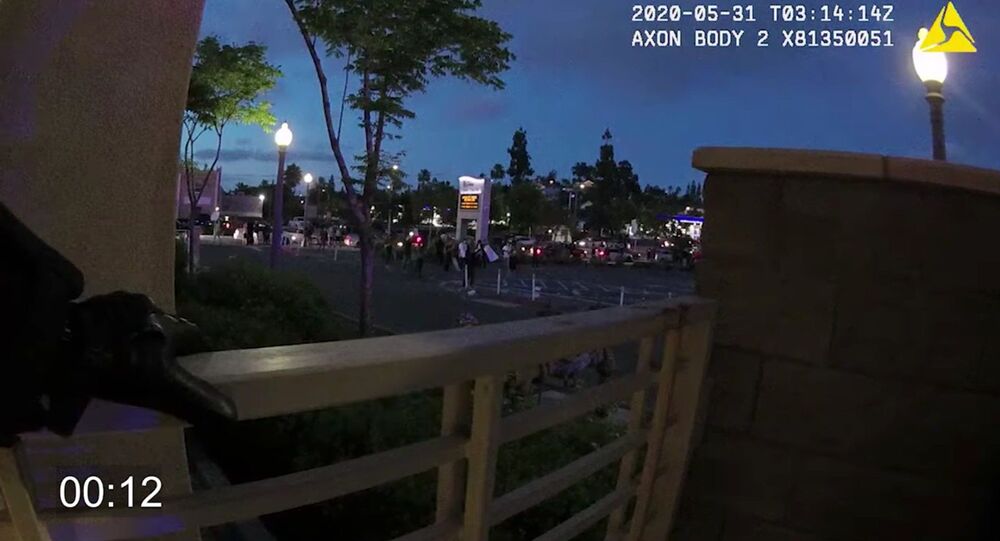 California’s La Mesa Police Department released body camera footage late Wednesday and identified the law enforcement official who was involved in the May 30 incident in which Leslie Furcron, a 59-year-old grandmother, was struck with a bean bag projectile on her forehead during a protest.

The released critical incident video notes that the May 30 demonstration began peacefully before it was ultimately declared an unlawful assembly shortly after 5 p.m. local time, moments after demonstrators walked onto Interstate 8.

After showing a series of images and cellphone clips that documented objects thrown toward officers and government buildings in the vicinity of the La Mesa Police Department building, the focus of the recording shifts to Furcron, who arrived at the area at approximately 8:14 p.m. local time.

The officer who discharged his weapon on Furcron was identified as Detective Eric Knudson, a 12-year veteran of the police force. The recording states that Knudson deployed the “less lethal” projectile after he witnessed Furcron toss an empty aluminum can into the parking lot of the police headquarters.

At the time of Furcron’s actions, deputies with the San Diego Sheriff’s Department were attempting to clear out the parking lot. It’s worth noting that Knudson was situated behind a balcony post some 96 feet away from Furcron when he shot her.

With Frucron having collapsed on the ground, the crowd of protesters immediately turn their ire toward the officers. “You shot her in the face! You sons of b***hes,” one person can be heard yelling out.

Video footage indicates that a total of five seconds passed from the time that Furcron was observed throwing the object to the moment that she fell to the ground.

Although Furcron was attended to by medical personnel not long after the attack, the so-called “less lethal” bean bag round left her with extensive injuries, which included multiple fractures to her skull and even blindness in her left eye. It’s unclear whether she will regain her sight.

Law enforcement officials often use rubber bullets and bean bag rounds, among other projectiles, as crowd-control measures; however, time and time again, such objects have proved to cause devastating and long-term injuries.

A 2017 analysis published in the British Medical Journal found that 15% of people who were injured by either rubber bullets or bean bag rounds were left with permanent disabilities, whereas 3% died of their injuries. The study, which reviewed decades’ worth of data on “less lethal” police projectiles, also noted that death or permanent disability often resulted from the objects striking a person’s head or neck.

“To see her like that really shocked me,” Furcron’s son Ahmed told local station CBS 8 at the time of the incident. “I was like, ‘how could you do her like that?’ I know Black men have been involved in a lot of stuff, but I couldn't believe they would actually shoot an innocent, Black grandmother in her face with her hands up.”

The department’s video release comes more than a month after Furcron’s family, who want Knudson fired from the force and criminally charged, filed a civil lawsuit against the city over the incident.

At present, Knudson has been placed on paid administrative leave pending an investigation into the matter. The case has been referred to the San Diego District Attorney’s Office to determine whether a crime has been committed.

Big Brother Watch: UK Police Use of Body-Worn Cameras Could Be Costly Danger