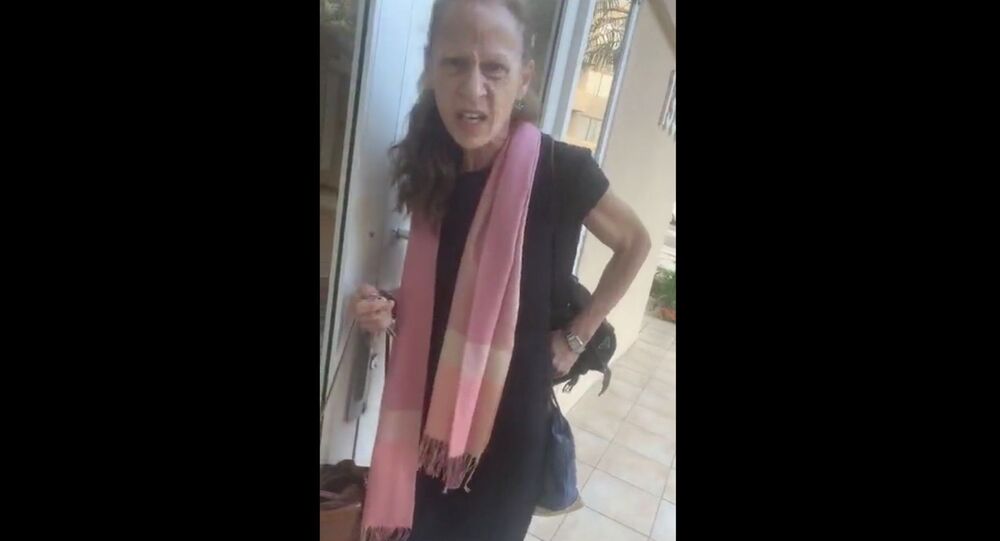 Newly surfaced cellphone footage has placed the spotlight on a California resident who recently went out of her way to block a Postmates deliveryman from entering an apartment complex and bringing an order to a customer.

Footage of the bizarre confrontation was recorded and shared on social media Wednesday by part-time Postmates contractor Jordan Gipson.

At the time of recording, Gipson was completing a delivery for a customer in the Westwood neighborhood of Los Angeles when he was suddenly confronted by an unidentified white woman at the entrance of a building.

The initial confrontation shows the pair standing at the entrance of the building, with the woman questioning why Gipson is wearing a mask. “Are you hiding something? What is this a holdup or something? Just take it off. Why are you wearing [that mask] for?” she says.

It’s worth noting that Gov. Gavin Newsom (D-CA) recently imposed a statewide mandate that orders all individuals within the Golden State to wear face coverings while in a public or high-risk setting in an effort to curb the spread of COVID-19.

The first clip documenting the delivery encounter cuts off moments after the woman begins to question why Gipson is in possession of a black LA Dodgers baseball hat.

However, not willing to back down and go about her day, the altercation was far from over as a second recording by Gipson later shows him using the building’s intercom system to alert the Postmates customer of the brewing situation.

“I have the number [to the apartment],” Gipson is heard explaining, as he attempts to get in touch with the client, identified as Paul. “I’m just ... I have food I have to deliver to somebody, ma’am.”

Eventually getting ahold of Paul on the intercom, Gipson starts to explain the situation when all of a sudden the upset tenant interrupts and begins to immediately interrogate Paul, asking for his name and apartment number.

“Where do you live?” she asks. “I’m not letting this man in. Can I bring this food to you? I'm at the entrance to your building.”

And that’s when Paul and the entrance-blocking woman begin a war of words of their own after the stunned Postmates client starts to ask questions of his own.

Gipson eventually interrupts the pair to comment that he’s just “a Black man trying to make a delivery,” and that he doesn’t know how Paul wants him to complete the transaction, since “she’s standing in front of the door.”

With no interest in piping down, the woman begins another round of comments towards Gipson, saying, “I don’t care if he’s a purple man, he doesn’t live here. I don't care who he’s working for.”

Paul eventually indicates that he is coming downstairs to retrieve the order; however, during the waiting period, the woman’s behavior bizarrely changes, with her trying to duck out of the camera’s scope and trying to start a conversation with Gipson about smartphones and basketball.

The video cuts off with Paul arriving on the scene and Gipson walking away after handing over the delivery. It’s unclear what later occurred between the two neighbors.

Since the incident, a GoFundMe campaign has been launched to help support Gipson with his living expenses.