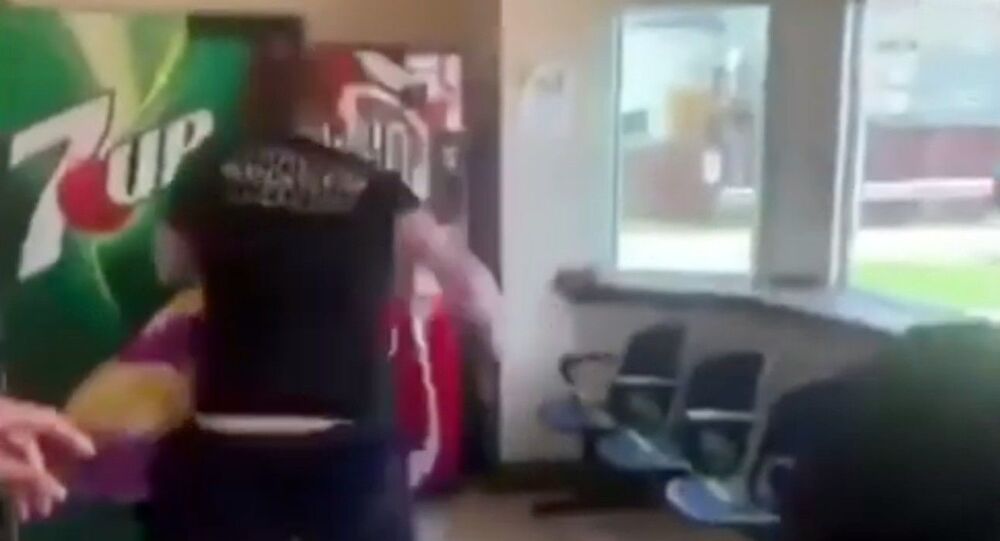 Newly surfaced cellphone footage captured the bloody, violent brawl that recently broke out at a resource center in Louisville, Kentucky, after a white couple reportedly began harassing a Black woman.

The incident, which took place at the city’s Nia Center, allegedly unfolded after a white woman decided to spit on a Black woman who was waiting to be seen at the center. It’s unclear what prompted the alleged act.

Although the recording doesn’t capture the exact moment in which the woman allegedly spat, the video begins with security officials trying to keep the two parties separated. At least two security guards are seen escorting the Black woman from the center, as the white couple is left standing near a corner of the room.

It’s not until the white couple is escorted toward the center’s entrance that the situation quickly escalates, and the alleged spitter’s partner starts to throw multiple punches toward a Black woman. It’s uncertain whether this woman was the same person who was initially spat on prior to the physical altercation.

However, within seconds, the attacker is pushed off the woman by a Black man, who manages to successfully resolve the situation after throwing a couple punches of his own and ultimately pushing the white individual to the ground.

At one point in the recording, a stanchion is thrown toward the white individual by a person off-camera.

“He started this,” an individual can be heard saying off-camera as others are heard making similar remarks. “He needs an ambulance,” another is heard saying.

The video cuts off with the attacker eventually picking himself off the ground to sit on a nearby chair at the center’s reception area.

It’s unclear if charges have been filed as a result of the attack.

Give Peace A Chance: Footballer Gets Bitten on Penis While Attempting to Stop Post Match Brawl