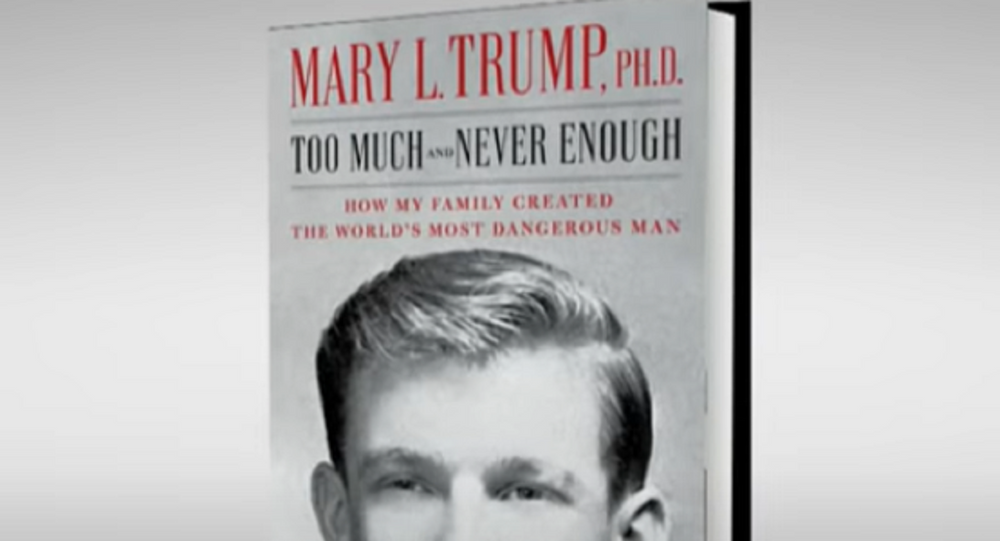 A tell-all book by US President Donald Trump’s niece Mary Trump, titled “Too Much and Never Enough: How My Family Created the World’s Most Dangerous Man,” will be published two weeks ahead of schedule, according to publisher Simon & Schuster (S&S).

The book, which is already charting at number four on Amazon’s bestseller list, was supposed to be published on July 28. However, it is now set to make its debut 14 days earlier on July 14, owing to what S&S described as “high demand and extraordinary interest.”

S&S on Monday also released the book’s back cover, which includes the snippet: “Today, Donald is much as he was at three years old: incapable of growing, learning, or evolving, unable to regulate his emotions, moderate his responses, or take in and synthesize information.”

Mary Trump remains subject to a temporary restraining order issued on June 30 by Judge Hal Greenwald of the Dutchess County Supreme Court in upstate New York, which barred Mary Trump and S&S from releasing the book. The restraining order was issued after the president’s younger brother, Robert Trump, attempted to block the book. Both Donald and Robert Trump have claimed that Mary Trump, who is the daughter of Fred Trump Jr., the president’s deceased older brother, would be violating a nondisclosure agreement by publishing the book.

However, on July 1, an appellate court judge lifted the temporary restraining order on S&S, saying the publisher is not bound to any agreements with the Trump estate.

“S&S is not a party to the settlement agreement. The only basis offered by the plaintiff to extend the temporary restraining order to S&S are the allegations that S&S ‘intends to act’ on Ms. Trump’s behalf in causing the publication of the book and that S&S is acting at Ms. Trump’s direction and in concert with her. However, these allegations are conclusory and not supported by any specific factual averments,” the judge ruled, according to The Wrap.

A spokesperson for S&S said the publisher was “gratified” by the judge’s decision to lift the restraining order.

“We support Mary L. Trump’s right to tell her story in Too Much and Never Enough, a work of great interest and importance to the national discourse that fully deserves to be published for the benefit of the American public. As all know, there are well-established precedents against prior restraint and pre-publication injunctions, and we remain confident that the preliminary injunction will be denied,” the spokesperson told The Wrap.

However, the temporary restraining order still applies to Mary Trump, who is expected to appear before the New York Supreme Court on Friday for a hearing and is currently blocked from publishing or distributing her book’s content. In Mary Trump’s appeal, she states that the 2001 nondisclosure agreement due to litigation over a family will is predicated on fraudulent financial information, the Guardian reported. Mary Trump’s attorney, Theodore Boutrous Jr., has also stated that the court’s restraining order violates the First Amendment.

The book is expected to discuss Trump family dynamics and reveal embarrassing information about the family.