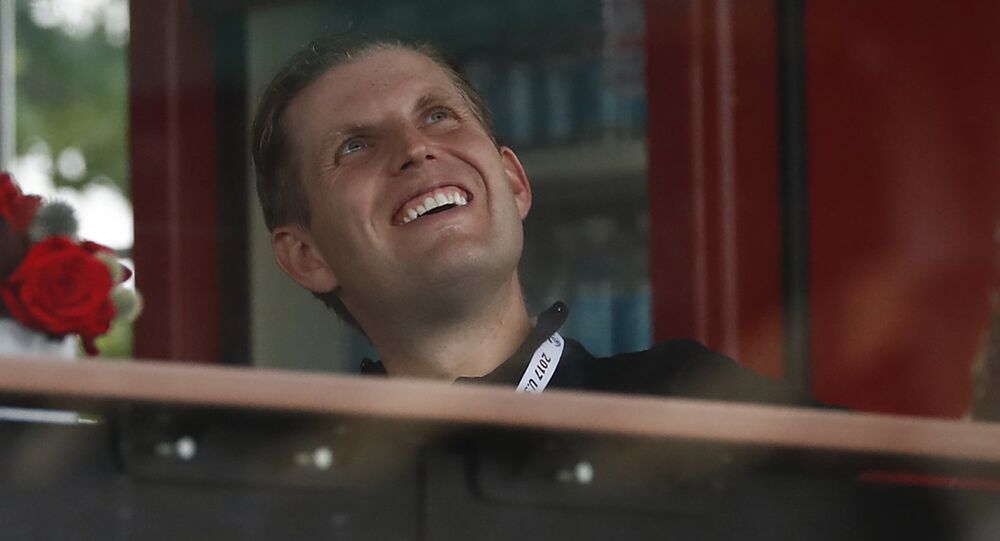 In a new development to the Epstein child-trafficking drama, the late tycoon’s alleged "madam”, Ghislaine Maxwell, was nabbed in New Hampshire, the US, after escaping the public eye for almost a year, since Epstein himself was arrested and then purportedly committed suicide in his New York prison cell.

Donald Trump’s third-born child Eric tweeted a photo of Ghislaine Maxwell at Chelsea Clinton's wedding, saying “birds of a feather” but has since been forced to delete it following a storm of diverse, argely taunting, reactions online.

Eric posted the image in an apparent bid to smear the Clintons for their ties to convicted paedophile Jeffrey Epstein and his 58-year-old “madam", as British socialite Maxwell has been dubbed, who was arrested and indicted by US prosecutors on Thursday morning. However, as it turned out, a set of other compromising pictures has re-emerged of Maxwell rubbing shoulders with the Trump family.

Netizens were quick to crush Eric’s attempt by bombarding him with either derogatory remarks, or with visual proof that his “birds of a feather” comment is quite bigoted and hypocritical.

One of the historic pictures they threw in the 36-year-old’s face sported Epstein, who is understood to have visited the Trump family at their Mar-a-Lago estate in the 90s, standing side by side with Maxwell, Donald, and Melania Trump. Another resurfaced picture shows a smiling Trump posing together with Maxwell and another lady during a party.

“Does the president's son not know that there are photos of Donald Trump with Maxwell?", MSNBC producer Kyle Griffin replied, with another going for a more straightforward “You really are the dumb one, aren't you?”, said another of the president's third child, with many more either quipping or depicting how Eric “made a fool of himself”:

You may have deleted the tweet of the Clinton wedding but you cant stop us from bringing to this thread. pic.twitter.com/bdUALCWWn4

Hey @EricTrump, saw that you deleted the tweet “Birds of a feather”. Saved this for you in case you didn’t get to see some of the replies. Didn’t want you to forget what an Idiot you really are. #HappyFriday 👻 pic.twitter.com/KtAvPS8EKk

I want you’ll to know that @EricTrump apparently deleted his tweet after he made a fool out of himself. That’s it. That’s my teeet.

The elusive Maxwell, who has been out of the public eye since her friend Jeffrey Epstein was taken into custody in July 2019, was arrested in Bradford, New Hampshire on Thursday morning and is expected to be transferred for court proceedings to New York.

The British socialite is facing a string of criminal charges for allegedly procuring underage girls for billionaire paedophile Epstein between 1994 and 1997, with one of the charges implicating her personal involvement in the sexual abuse.

If found guilty on the string of charges she was slapped with, Maxwell could be imprisoned for life, a little less than a year after Epstein was found dead in custody while awaiting a new trial.

Epstein, who post mortem has become a central figure in sexual abuse allegations and conspiracy theories, was known to have had a powerful network of contacts and friends, many of whom were millionaire businessmen and politicians, like for instance, Bill Clinton.

Speaking about his ties to the convicted paedophile, Donald Trump said their friendship was doomed and ended soon after Epstein’s Mar-a-Lago visit. Prince Andrew, the Queen’s second son, another prominent figure alleged to have regularly kept in touch with Epstein, unequivocally denied claims he had sex with minors upon Epstein’s arrangement, saying he was unaware of the billionaire’s criminal activity when he visited him at his Big Apple home.