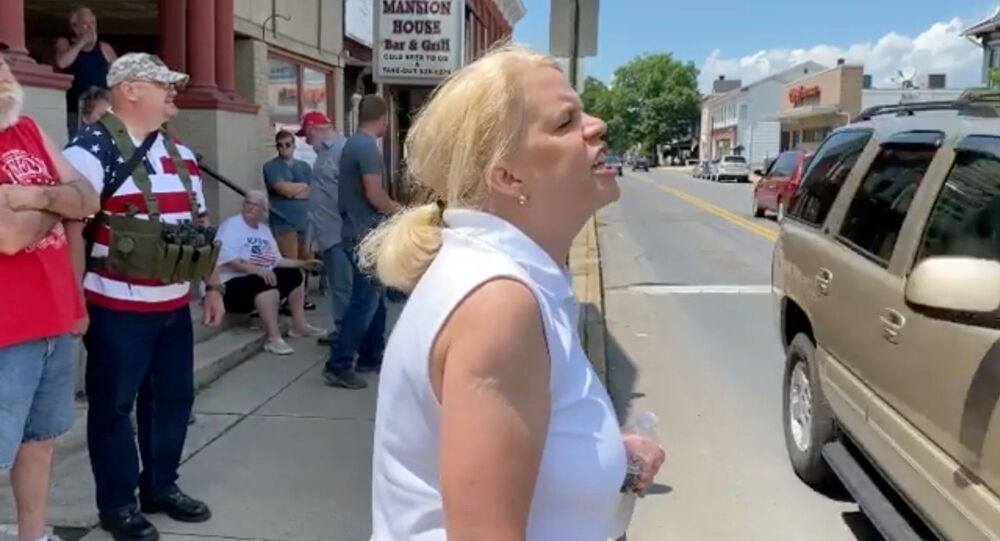 An unidentified US woman was recently caught in a since-deleted video slinging a profanity-filled rant against a group of Black Lives Matter (BLM) protesters who were demonstrating over the weekend in Watsontown, Pennsylvania.

The 31-second video was captured and posted on Facebook by local photographer Paul Weaver and has since been shared across social media. Weaver explained in a post that the demonstration included roughly 200 Black Lives Matter protesters, with about 50 counter-protesters present at the event.

The video recording picks up with the event already underway, showing the unidentified blonde woman alongside counter-protesters situated across the street from the demonstration. Judging from the footage, the woman appears to be the only vocal counter-protester at that time.

“You’re trash … f**k you,” the woman is heard saying toward BLM protesters, who are chanting “No justice, no peace.” She continues her expletive-filled rant with: “We’re going to give you ‘no peace,’ b***h! You f**king b***h, you live off of white people.”

After a multiple protesters are heard responding, “We love you,” the woman lashes out at the group by calling them “f**king communists” and telling them to “f**k off.”

As the video comes to an end, she signs off by telling the protesters to “keep your HIV over there.”

The comments on Weaver’s Facebook post include people wanting to know the woman’s name, others critiquing the individual’s remarks and some locals suggesting that she’s not exactly from the town, as they don’t recognize her.

“Share this!!!! Then she will be crying and apologizing when she gets fired and exposed!!!!” wrote a Facebook user.

Another commented: “She and everyone on her side were absolutely disgusting!!! Nothing but hate in their hearts!!”

Additional footage shot by Weaver at the demonstration shows local law enforcement officials from the Keystone State, along with members of the Pennsylvania State Police, standing in between opposing sides in an effort to prevent any physical altercations.

Weaver noted in a post that the event, which was organized by local activist group If Not Us, Then Who, saw the arrival of various individuals who were part of a motorcycle club and members of the Three Percenters, a far-right militia movement and paramilitary group, according to the Anti-Defamation League.

Protests ignited by the in-custody death of Minnesota resident George Floyd have been taking place for several weeks across the US, calling attention to the continued mistreatment of Black Americans at the hands of police.