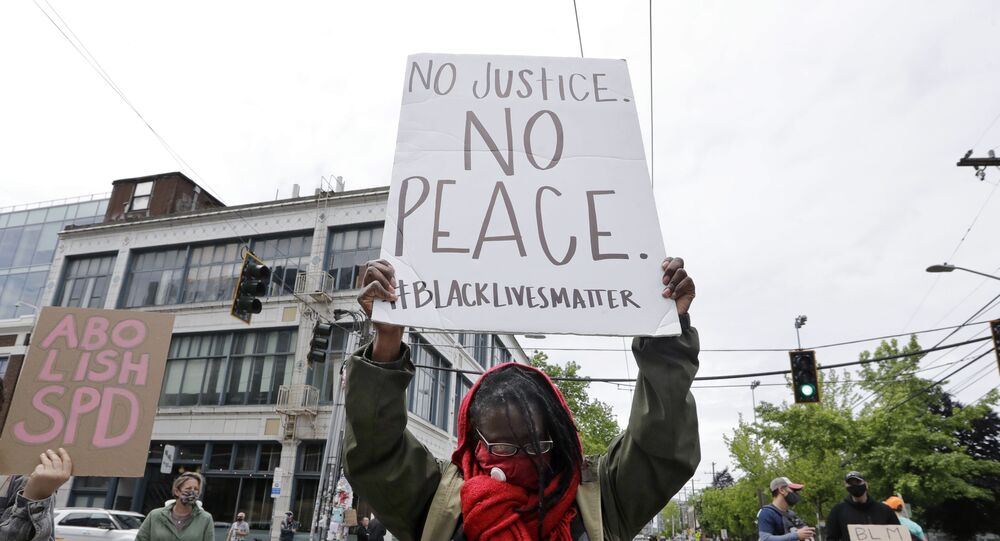 The gym's management promptly issued an apology for a tone deaf offer, but their clients and the general public appear to deem it meaningless unless the people behind the workout description are sacked in disgrace.

A Wisconsin gym and and its umbrella company Anytime Fitness, which issued it a franchise, has apologised after an instructor offered clients a workout referencing some of George Floyd's last words - "I can’t breathe".

The gym said they "are terribly sorry for our actions this week by offering an ‘I Can’t Breathe’ workout".

"No matter our intent, we now recognise how deeply offensive our words, illustrations, and actions have been", staffers said in a statement on Facebook, followed by the top management of AnyTime Fitness.

An image of a dry erase board describing the 35-minute workout at AnytimeFitness in Wauwatosa featured a sketch of a kneeling man, also reminding of Floyd's final moments, and an inscription: "And don’t you dare lay down". It isn't exactly clear what the saying referred to, though.

The workout description, alleged to have been first shared on Reddit, instantly landed in netizens’ crosshairs, with furious comments continuing to flood Twitter even after the apologies were issued. Many have called the verbal move totally insufficient, demanding that those responsible for the description or even the whole franchise be fired.

OMG, I can see why white folks cannot empathize with BLM. You should fire the franchise.

but did you fire them? you guys skirted around that topic very smoothly.

If you haven’t fired the employee/s that did this, then your apology is meaningless.

This is unacceptable. The franchise needs to be pulled immediately as well as firing that trainer. Absolutely disgusting.

Quite a few even saw certain similarities between the company logo and the swastika:

Before I saw this, I was like, Is thier logo almost a swastika??? Wth

The incident comes as the US has seen massive two-week demonstrations against the death of African American man, Minneapolis truck driver, and bouncer George Floyd, at the hands of local police on 25 May. As was seen in a video of the fatal encounter, Derek Chauvin, later charged with third-degree murder and second-degree manslaughter, pinned the man, suspected of using counterfeit money, to the pavement with his knee for almost 9 minutes, despite Floyd begging to let him breathe.

The protests eventually grew into violent riots against not merely police brutality but racial injustice at large, gathering crowds all across the US and Europe, with the fallout - reckoning with racism - already seen in different US industries from top corporations (like CrossFit) and media organisations (Bon Appétit) to pages of the dictionary.