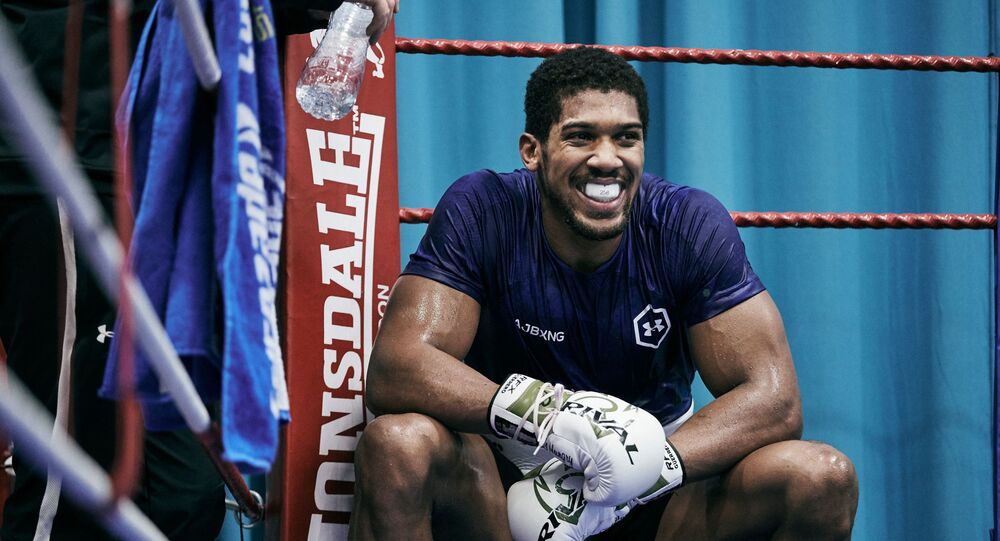 ‘Go F*** Yourself!’ Heavyweight Star Anthony Joshua Strikes Back at Him Being Blasted ‘a Racist’

The boxer responded to those deeming his calls to avoid "their shops" as racist, arguing the clip that is now viral had been edited to contain no attribution to the actual speaker.

Heavyweight world champ Anthony Joshua has launched a tirade against his critics after being accused of racism following his appearance at a Black Lives Matter protest in Watford, Hertfordshire.

The IBF, WBA, and WBO star attended a peaceful protest on Saturday and read out a speech on a microphone to the crowd of attendees stating from the very start that it was on behalf of someone else who could not attend the event.

However, the Watford-born fighter’s speech was circulated online in a clip with the cut-out introduction, so that the whole utterance looked as though the comments to avoid businesses owned by white people were his own thoughts.

“Show them where it hurts. Abstain from spending your money in their shops and economies, and invest in black-owned businesses", Joshua’s speech went.

The video quickly went viral, promoting a storm of jabs:

Using the pronoun of “Their”. AJ is referring to the group of racists, he never mentioned white throughout his speech, "he said abstain from spending your money in THEIR shop", he’s definitely referring to the known racists and regardless of any races even the blacks itself.

Doesn’t care what race they belong to, AJ is referring to whoever that is racist toward the black community.https://t.co/5VywqzWUNG

Joshua was quick to weigh in saying:

"If you think I'm a racist, go f*** yourself!”, the 30-year-old boxer tweeted his blistering response.

"If you watch the full video, the speech was passed around for someone to read and I took the lead", he further explained, but this was deemed insufficient by quite a few:

So if you read something that's offensive but someone else has written it then it's ok?

Bang out of order, caught and now back tracking. Way down in my estimation and you won’t have to worry about this white mans £25 for your next fight

“Seeing that the vast majority of people buying tickets to watch him fight are white then yeah he’s probably about to have nightmares!”, one stated.

However, some admitted the reason for the backlash is right there on the surface:

I don't think AJ is racist, I just think he was daft enough to read a really badly worded speech given to him. Saying dont shop in 'their' shops etc isn't good. Not surprised he's had to defend himself. It seems the whole BLM protests is really dividing people. It shouldn't be.

Don’t think aj racist at all but shouldn’t of come out with that part even if not his words . Very strange telling people to not shop at other race owned shops especially when all races buys tickets and Ppv which helps supports his family

Joshua acknowledged he had spoken from the heart about the Watford community, ideas of investing seven figures "to create unity and opportunities and adding change to the African/Caribbean community", in reference to his own financial injections into the cause and calls for the government to do the same.

"Shops aren't the issue here. Before you talk s***, you better boycott racism", the 2012 London Olympic gold medalist of Nigerian descent, and who has more than once praised his descent, summed up.

Joshua also addressed criticism that he hadn’t been complying with social distancing rules, reversing the accusations against those heading to parks for picnics, etc.

But where is your mask? So irresponsible to be in a crowd and no mask.

"I hope those who are complaining about social distancing have the same energy about those gathering for a day at the beach (and) those going to the park for a picnic", the athlete made his stinging remark.

"We have to engage with the youth and put an end to black youth gang culture. This postcode war - how many houses do we own on that postcode that we're fighting for?", he queried before reiterating the protesters’ slogan "every life matters" and referring to George Floyd’s death as merely “a catalyst in a list that is way, way, way too long".

Joshua’s comments came as thousands took to streets in the US and well beyond in stringent opposition to the brutal killing of George Floyd, an African American forgery suspect, who died after a police officer pressed his knee against his neck for a lengthy 8 minutes despite him mid-way losing consciousness.