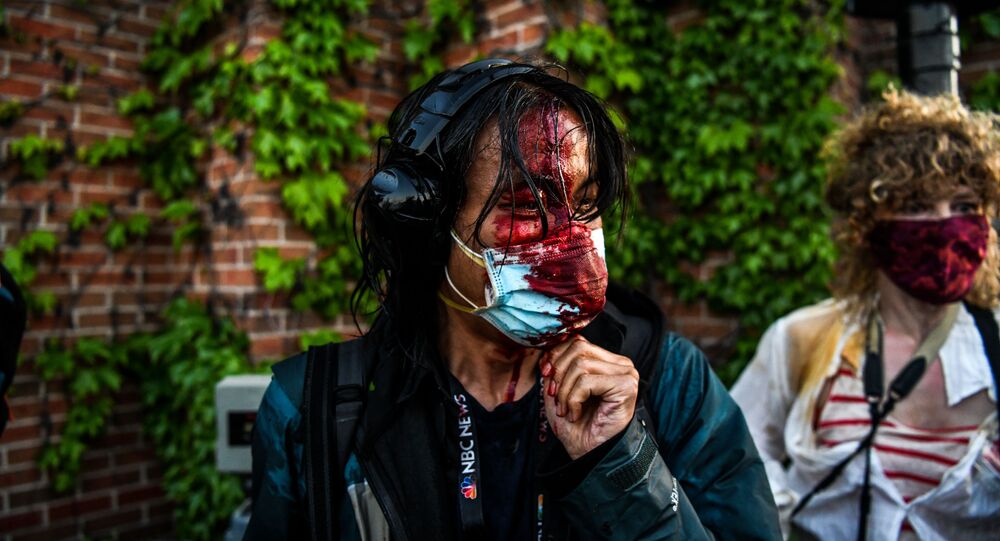 US authorities have now imposed curfews in 40 cities to stop the violent protests, but the demonstrators have largely ignored them. This has led to clashes with riot police, who have resorted to flash grenades, pepper bullets, and tear gas.

The violent protests over the death of George Floyd, a black man who died at the hands of a white police officer, are continuing unabated in the United States. The unprecedented unrest has now swept 75 cities in the country, with buildings being burned and destroyed as well as shops looted. Experts have already called the protests the most widespread and violent backlash since the 1968 unrest, which began after the assassination of Martin Luther King.

However, this time there have been unusual victims of the protests – journalists. From Minneapolis, where George Floyd died, to Washington, DC, reporters, photographers, and camera crews have been repeatedly assaulted. Here is a list of the most prominent cases.

Leland Vittert and his team were covering the protests in Washington, DC outside the White House when suddenly a group of masked protesters surrounded them and of the demonstrators lunged at the correspondent. The news team then decided to leave the area; however, the protester kept chasing them. The crew was punched and hit by projectiles as they tried to flee the scene. "Imagine what it's like to be a black man, feeling like this every f**king day", one black woman shouted at the crew.

On Thursday, @SenWarren called Fox News “a hate-for-profit machine that gives a megaphone to racists and conspiracy theorists.”

Here’s what her horrific rhetoric — and that of so many leftists — has led to:

​Leland Vittert, who has been covering protests and conflicts across the world from Ukraine to Libya, said this was the scariest situation he had been since he was chased by a mob in Egypt’s Tahrir Square during 2011's Arab Spring.

Stefan Simons and his team had a dangerous encounter with police when they were reporting on the protests in Minnesota. Police officers shot at Simons with what looked like rubber bullets during a live broadcast. "This is press, guys. Stop shooting at us. We are in the middle of a live broadcast", Simons shouted to police officers during the live coverage.

In another incident, Simons and his cameraman tried to document how three policemen surrounded a car of a TV production team (Simons couldn’t tell what network the team worked for), but when they came close to the scene, the police threatened to arrest both journalists. "Stay by the car, you are going to get maced", a police officer can be heard shouting in the video.

"I can somewhat understand [their actions]. Those policemen are under a lot of stress doing their job, but of course they should have let us work and do our job”, said Simons, commenting on the incident, adding that his team did not try to pick a fight with law enforcement.

RIA Novosti correspondent Mikhail Turgiyev and a production team for Vice were pepper sprayed in their faces by police officers while working in Minneapolis. The incident occurred after members of the National Guard dispersed protesters. Guriev, together with the Vice crew, was allowed to stay at a gas station together with the owners and people who were helping them protect it.

Suddenly, a police van arrived at the scene and officers started firing rubber bullets. After the journalists showed their press cards, the shooting stopped and the police officers demanded that everyone enter the building. One of the officers pepper sprayed a Vice journalist, even though he showed his press card. The same happened to Mikhail Turgiyev.

In some incidents, the protesters have been the heroes rather than the villains. This is what happened to photojournalist Ian Smith, who works for CBS-owned KDKA-TV. Smith was attacked by an angry mob of demonstrators, who stomped and kicked him and destroyed his camera. Another group of protesters noticed this and rushed to save the journalist. "I'm bruised and bloody but alive”, Smith wrote in a post on Twitter. “A group of protesters pulled me out and saved my life. Thank you!"

Photographer and author Linda Tirado was left permanently blind in her left eye after she was hit by a rubber bullet, which she said blew her eyeball up.

Hey folks, took a tracer found to the face (I think, given my backpack) and am headed into surgery to see if we can save my left eye

​NBC social media journalist Micah Grimes was luckier. Grimes said he and his aide were “intentionally” shot by State Patrol or the National Guard with a canister containing green powder. The journalist said that after the shot, the police officer taunted him, appearing to suggest he would do it again.

This appears to be the type of canister the policeman or guardsman aimed and fired at me as I turned away from him, hitting my right aide. Then taunted me like he was going to shoot me again. Ah, well. Work continues. https://t.co/Tw7W0PdN5e pic.twitter.com/sa8iNJ3lZs

Arrests of CNN and Channel 9 Journalists

CNN correspondent Omar Jimenez was reporting live in Minneapolis in an area where a police station was burnt by protesters when he and his team were arrested by law enforcement for not following police orders. The officers instructed Jimenez and his team to move to another area.

"We can move back to where you'd like here. We are live on the air at the moment”, the correspondent told the officers. The next moment, an officer told Jimenez he was under arrest. His arrest was broadcast live. CNN called the incident "a clear violation" of the First Amendment that protects freedom of speech. Later, all members of the CNN crew were released. Minnesota Governor Tim Waltz apologised for the incident, which he called "unacceptable".

Our reporter @OmarJimenez was just arrested live on #CNN while covering protests in Minneapolis. He identified himself as a journalist and asked where he and his crew should stand to continue working. pic.twitter.com/QLoHwOgoFd

​Journalist Tim Arvier and his team from Australia's Channel 9 were detained at gunpoint by police officers in the middle of the protests. The team was driving through Minneapolis when they heard gunfire and were then approached by police officers, who forced everyone out of the car, searched, and handcuffed them. After the police learnt that they were journalists, they released them. “While they were a bit aggressive and confrontational at the start, it’s how nervous they are after what has happened over the last few nights”, Arvier said.