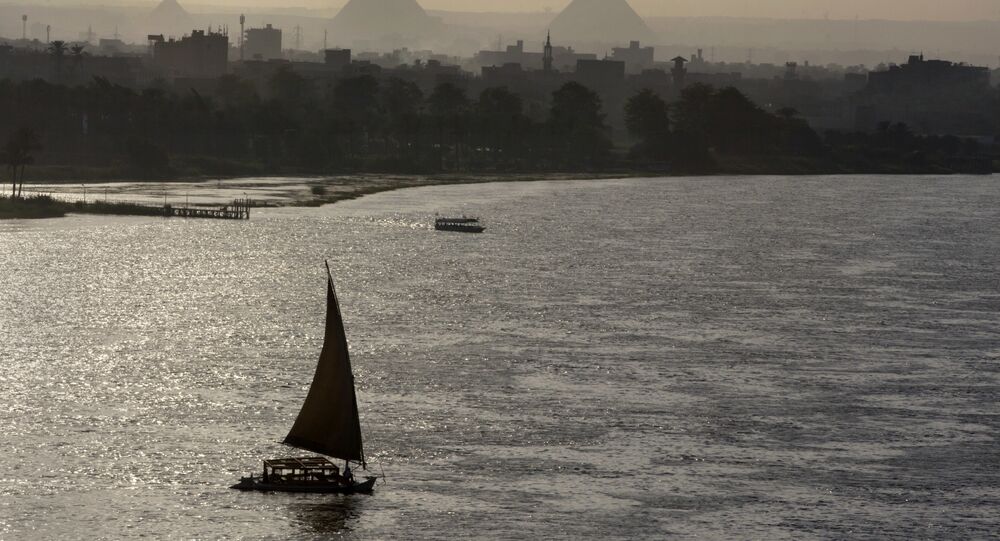 Ancient Egypt’s Heracleion was for much of history viewed as a mythical location, especially since it was overtaken as a top financial and trading hub by Alexandria in the second century BC, and nothing would have changed in the common perception if not for French mathematician Franck Goddio.

In a stunning revelation, it appears that what had for centuries been considered to be a mythical ancient city was in actual fact hiding beneath the Nile's vibrant waters, as follows from a documentary on Egypt reported on by the Express.

Mentioned even by Herodotus, the most prominent historian of antiquity, the city in question, guarded by and named after the watchman Thonis, was alleged to have been visited by a whole range of semi-mythical and semi-historical figures like Helen of Troy and, notably, Heracles, whose arrival in Egypt led Thonis to be renamed to Heracleion.

© AP Photo / AMR NABIL
A large statue of the god Hapi, foreground, and other two unidentified statues lay on the deck of a boat in Alexandria, Egypt Thursday, June 7, 2001, after a French underwater archaeological team raised them to the surface along with other precious items that had laid hidden in the murky depths. Researchers said Thursday, they have only just begun to probe the extraordinary treasures of the sunken city of Herakleion. More than 1,000 years ago, an earthquake sent the Pharaonic city of Heracleion to the bottom of the Mediterranean

There had long been no trace of the city left and it was alleged to have sunk into oblivion, if at all existed. But at some point in the not-so-distant past, mathematician Franck Goddio set himself a goal to find it, as follows from a 2012 Amazon Prime documentary “Egypt: A Sunken City”.

“Off the coast of Egypt, northeast of Alexandria, seven kilometres out, there was said to be a giant secret slumbering under the surface of the water”, the series recounted, moving to depict the ancient Nile Delta once dotted by small neighbouring islands, before it saw them vanish away over the past 2,000 years.

“Frenchman Franck Goddio first stumbled across this mystery some 30 years ago, he met an archaeologist who told him there could be sunken cities in Abu Qir Bay and from that moment, Franck Goddio was hooked”.

The documentary further recounted how back in the 1940s, a pilot reported seeing strange shapes as he flew over the area, “but nobody seems to be interested”.

Goddio has since zeroed in on his skills as a mathematician and statistician, viewing the mystery “as a calculable mathematical problem”, the documentary went on.

Armed with electromagnetic dragging technology, the scientist entered all the details into his computer and after compiling a comprehensive visualisation of the seabed, he noticed some unusual features.

“He puts together an international team of scientists and divers, initially finding nothing, but finally, the divers make a discovery – large limestone blocks arranged next to each other”, the series went on.

In collaboration with top researchers in the field, archaeologist Professor Sir Barry Cunliffe and maritime trading specialist Professor Andrew Wilson, Goddio found underwater evidence of an ancient temple, which was said to be in the heart of the city - a shrine to Amun-Gereb from the time of the city’s height in the late period of Ancient Egypt.

“Where they believe the Temple of Heracleion should be, they discover a large monolith, perfectly preserved, a shrine to Amun-Gereb”, the series noted, further depicting how the divers’ “wildest expectations were surpassed” as they stumbled on “three colossal statues, broken into just a few pieces, but otherwise in a surprisingly good condition”.

“They are clearly of a Queen and a Pharaoh, the third is the god of the waters of the Nile, magnificent images from the Ptolemaic dynasty that ended in 30 BC”, the documentary recounted.

The large temple of Amun-Gereb, the supreme god of the Egyptians at the time, was the city’s main landmark and according to the chronicles it sank as the clay city of Heracleion submerged underwater after having been weakened by earthquakes, tsunamis, and rising sea levels combined towards the end of the second century BC.