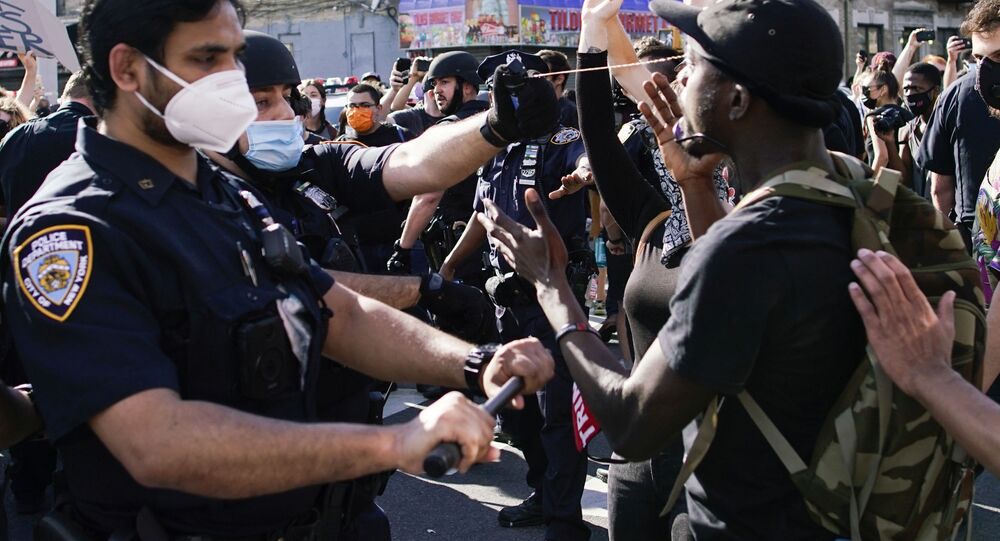 Authorities in the United States recently introduced curfews in order to curb violent protests that have been raging across the country since 26 May. One of the cities hardest hit by the unrest is Los Angeles, where California Governor Gavin Newsom declared a state of emergency.

The death of George Floyd, an African-American, in policy custody has sparked huge outrage across the United States and reignited long-standing anger over police brutality against black Americans and the debate on race relations in the United States. Tens of thousands of people have taken part in demonstrations including celebrities.

The 28-year-old supermodel and actress has become involved in political activism in recent years. The CEO of a swimwear line was spotted at a protest in Los Angeles wearing a placard that read: "Dismantle power structures of oppression".  Ratajkowski frequently posts updates from protests on her Instagram. On Saturday, she posted a statement that questioned whether the aggressive behaviour of protesters could be categorised as violent.

The 22-year-old daughter of singer Michael Jackson has been seen with her friends during demonstrations in California. Model and budding actress and musician, Jackson said she was heartbroken over the death of George Floyd. The 22-year-old lamented that many protests had turned violent. “Violence is not the answer. How do we expect to bring our world up to a happier and higher and healthier way of living if we’re stooping as low as those that committed the crimes we’re protesting? Peace protest only!”, Jackson wrote on Instagram.

The 32-year-old star of How to Get Away with Murder and The Vampire Diaries, frequently updates his thousand-strong army of followers on his experience during protests. The actor said he and his assistant were beat up by police officers, who tried to disperse demonstrators. Sampson said he himself got hit 7 times with rubber bullets, with one police officer aiming his gun "directly" at the actor.

Among other celebrities seen during the protests were British musician Yungblud, rapper Machine Gun Kelly, and actresses Porsha Williams and Courtney Eaton.

© REUTERS / Carlos Barria
George Floyd Death: Other Cases of Violence Against Black Americans in US

Other celebrities, including NBA superstar LeBron James, Hollywood actor Jamie Foxx and singers Billie Eilish and Lady Gaga used social media platforms to raise awareness about the issue of police brutality and racism in the United States and called for justice for George Floyd.

Floyd, a 46-year-old African American, died in policy custody on 25 May. He was arrested after police received a call about the attempted use of a fake banknote. A video footage featuring his arrest showed a white police officer kneeling on Floyd’s neck and the latter repeatedly saying that he couldn't breathe. Floyd was held handcuffed and face down until he became unresponsive. Derek Chauvin, the man who pinned Floyd to the ground was later arrested on murder charges, while three other police officers have been fired.