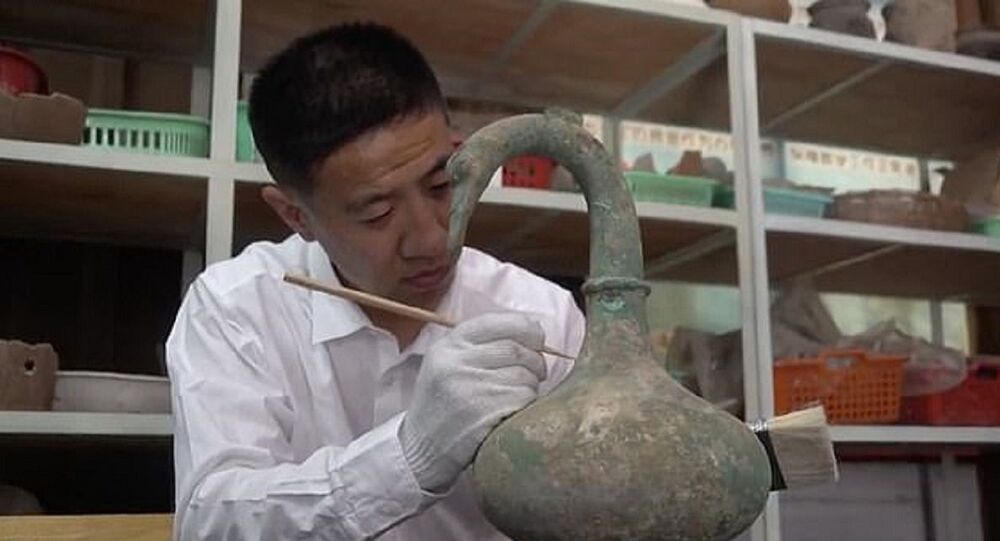 What was initially deemed as some early type of grain alcohol came out of a delicate object - a swan head-shaped pot with “lifelike” features.

Researchers with the Sanmenxia Archaeology Institute in Central China's Henan Province have dug out a 2,000-year-old swan-shaped bronze vessel which they say contains more than 3 litres of a mysterious liquid - now the subject of testing, a Daily Mail report has it.

Along with a slew of other burial objects, the bronzeware pot was spotted inside an intact grave from around 221 BC that was discovered by accident, when an urban development project was carried out in the area.

According to researcher Yan Fei, more than 3 litres of brownish liquid poured out from a small hole.

"The swan-head bronze vessel is a rare find. It is the first time we've found such an item in this area", Yan asserted, stressing a striking resemblance to natural facial features "including its mouth and eyes".

He believes these minute details are a clear indication of "how skilled early civilisations were at creating bronzeware".

Though members of the public have assumed the vessel could have been used to store some early form of grain alcohol, Mr Yan's institute said it has invited experts from Beijing to test the substance before making any conclusions. The tests have been carried out since 18 May.

The tomb the vessel was in has been dated to the chaotic period between the end of the Qin Dynasty (221 to 207 BC) and the early Han Dynasty (206 BC to 220 AD), with the researchers suggesting the item likely belonged to some low-ranking official.