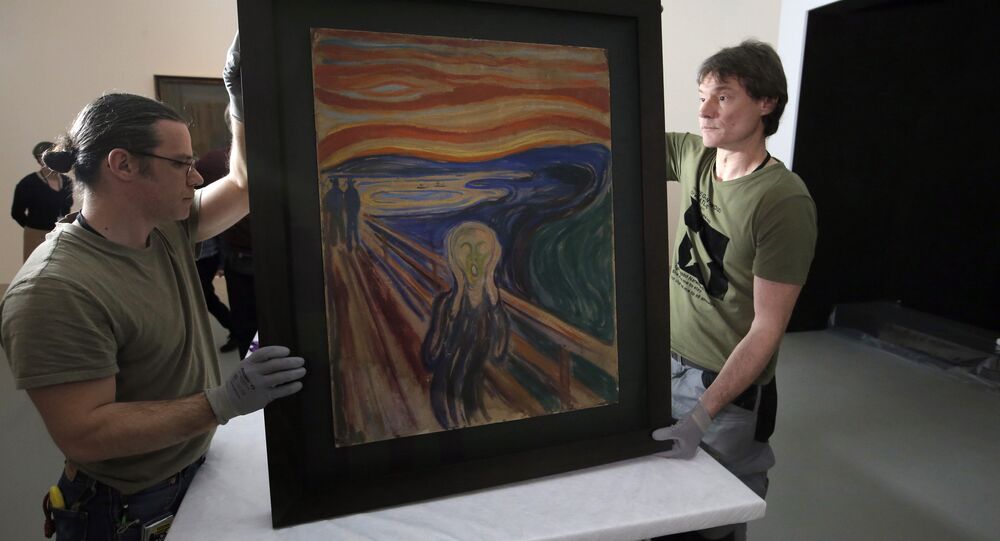 According to a group of scientists, the famous 1910 painting “The Scream” by Norwegian artist Edvard Munch is being damaged by increased humidity caused by viewers’ breathing.

Social distancing might be enough to make many of us scream, but for Munch’s 1910 painting, just breathing hard is enough to cause “The Scream” some damage. Thanks to an accidental choice of paint ingredients by the artist, the increased humidity caused by the breath of visitors to the painting at Oslo’s Munch Museum is causing colors in the work to change, and curators are rushing to prevent further damage.

The findings were expounded upon in a study published in Science Advances on May 15.

“It turned out that rather than use pure cadmium sulphide as he should have done, apparently he also used a dirty version, a not very clean version that contained chlorides,” Koen Janssens, a chemistry professor from the University of Antwerp and one of the authors of the article, told The Guardian about Munch’s choice of pigments when creating the iconic work of art.

“I don’t think it was an intentional use – I think he just bought a not very high level of paint. This is 1910, and at that point the chemical industry producing the chemical pigments is there, but it doesn’t mean they have the quality control of today,” Janssens noted.

Thanks to the impurities, even low levels of humidity are causing the painting’s yellow areas to fade and flake, turning the central figure’s neck and parts of the painting’s sunset background an off-white color.

Janssens noted that while some restorationists had initially suspected light to be the cause of the painting’s fading, as is often the case with works made with oil paints, that wasn’t the source of the problem with Munch’s work.

“You have to start working with the relative humidity in the museum, or isolate the public from the painting, or painting from the public, let’s say, in a way that the public can appreciate it but they are not breathing on the surface of the painting,” Janssens said. He noted that the Munch Museum is due to move to new housing next year, so the curators are looking at incorporating the researchers’ findings into how the next facility will be laid out.

The Norwegian artist made four versions of “The Scream” between 1893 and 1910, with the last becoming the most iconic of the set. Its fame resulted in its theft in 2004 in a daring, daytime raid by armed, masked gunmen. The bandits purloined Munch’s painting “Madonna” as well, and while the works were recovered two years later, “The Scream” was left with a brown water mark, and the men were charged 750 million Norwegian kroner in damages.