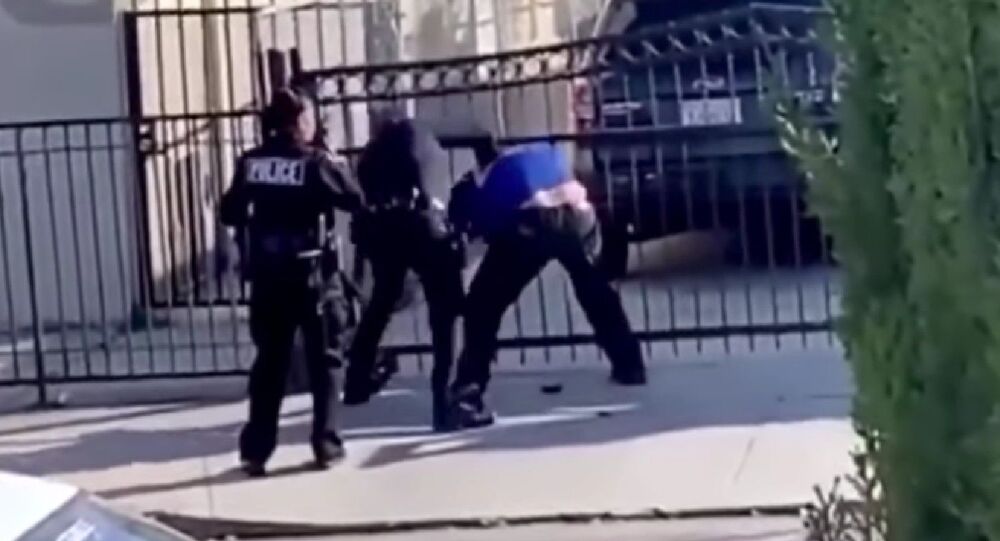 The violent interaction unfolded on April 27 after two officers with the LAPD’s Hollenbeck division responded to a trespassing call on the 2400 block of Houston Street in the Boyle Heights area, reads a statement issued by the department after the video began to circulate late Monday.

Upon arriving, both officers directed the unidentified suspect to leave the property near the Church of God of Prophecy; however, at some point during the interaction, the individual was instructed to place his hands behind his back. Video of the late April incident picks up at that exact moment, with both officers seen standing across from the arrestee.

Less than 30 seconds into the recording, the male officer throws the first of multiple overhand punches to the back of the suspect’s head while shouting out several profanities, video shows. As the second officer steps away to radio for assistance, her partner continues to pummel the suspect, even as he attempts to take a few steps back to avoid the blows.

“F**k you! What the f**k is wrong with you?” the suspect is heard yelling out as the offending officer later moves to hold him in a body lock. Mirroring the suspect’s tone, the officer replies, “Shut the f**k up,” adding that the arrestee isn’t cooperating.

Still heated, the officer continues, telling the suspect that he’s “gonna get hit again” if he doesn’t “get on the ground.” It’s at this moment that the second officer is seen somewhat intervening by placing her hand on her partner’s wrist as he prepares to throw a punch.

The recording eventually cuts off as the officer begins yelling at a concerned local who called him out for his behavior. “Get inside. He’s the most friendly guy? He f**king attacked me. Just get inside. Get inside,” the cop says.

David Winslow, the offending officer’s lawyer, told the Los Angeles Times that prior to the recorded events, the suspect was being aggressive to both officers and reportedly knocked his client’s body-worn camera to the ground after striking him in the chest during an initial search. Winslow further explained that his client only opted to use physical force against the suspect after he’d been threatened by the individual.

“The use of force is justified because the officer believed he was under attack from the suspect,” the lawyer said. “Even though you might think the suspect wasn’t fighting back at that time, he wasn’t complying either.”

The LAPD statement indicates that the suspect, who declined medical attention, had abrasions to his head and face, while the officer had minor injuries to his hand. The suspect was later released from police custody.

“While we are withholding judgement on the actions of the involved officer at this time, the officer has been assigned home pending further investigation,” reads the Monday release from the department.

Charles Heal, a use of force expert and retired law enforcement official formerly with the Los Angeles Sheriff’s Office, told the Times that the “blows are hard to justify.”

“The video doesn’t show everything, but it does show you a lot,” he said.

The internal probe is being monitored by the Justice System Integrity Division, a department under the LA County District Attorney’s Office, and the police department's Office of the Inspector General.