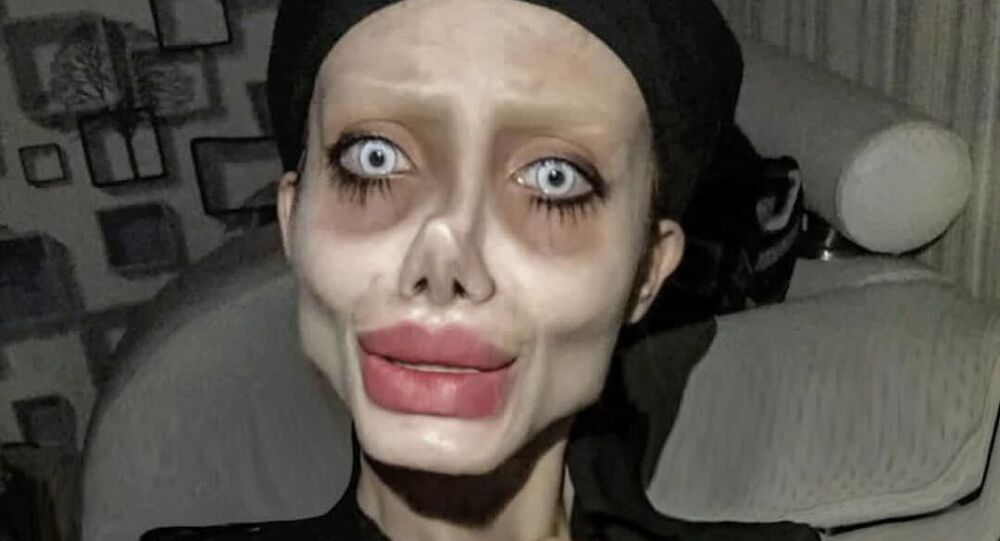 In October, Iranian Instagram celebrity Fatemeh Khishvand, generally known to the public as a “Zombie” version of Angelina Jolie, was arrested on a number of charges, including blasphemy and corrupting the youth. She is now facing years in jail, after a judge has repeatedly rejected requests to release her despite the coronavirus lockdown.

Iranian insta star Fatemeh Khishvand, known on social media as Sahar Tabar or the “Zombie Angelina Jolie”, has reportedly contracted coronavirus while in a state prison and has now been put on a ventilator at Sina Hospital in Tehran, the American Center for Human Rights in Iran (CHRI) reported, citing human rights lawyer Payam Derafshan.

“We find it unacceptable that this young woman has now caught the coronavirus in these circumstances while her detention order has been extended during all this time in jail,” Derafshan told the organisation on Wednesday.

He argues that requests to put the blogger on bail during the coronavirus lockdown, as many prisoners detained on similar charges have been temporarily released, have been rejected many times by the Presiding Judge in the case, Mohammad Moghiseh, and now he is nowhere to be found in the courthouse.

“We went to Mr. Moghiseh’s office many times and asked him to cancel the detention order and grant bail instead,” Derafshan explained. “But the judge said no.”

​“And now that the coronavirus has spread, we keep looking for Mr. Moghiseh but we can’t find him in the courthouse. They say he’s there, but we haven’t seen him,” the lawyer continued, arguing that the responsibility for Khishvand’s state behind bars entirely rests upon the presiding judge.

Meanwhile, according to CHRI, on 14 April, the director of Shahr-e Rey Prison, where the Instagram celebrity was held, said that Khishvand did not have coronavirus. Derafshan rejected this statement, arguing that there was “no sense to deny this” and insisting that “the prison director should acknowledge the infection”.

The Angelina Jolie lookalike was arrested in October 2019 on charges of blasphemy, “incitement to corruption by encouraging youth to engage in lunacy”, “corruption on Earth”, and acquiring an “illicit income”. She was widely known on Instagram as Sahar Tabar but this account has now been deleted.

Khishvand rose to popularity following reports about numerous surgeries she had to endure to reach her desired “zombie-like” image. However, the blogger later revealed that her otherworldly look was mostly attained with the help of Photoshop and heavy makeup.

© Photo : sahartabar_official/instagram
Iranian 'Zombie Angelina Jolie' Creeps Followers With Mommy Moment
She has also recently argued during her appearance on the country’s state TV, that despite resemblance to the Hollywood star, her look was mostly inspired by a zombie-like character from the animated cartoon “Corpse Bride”, and confessed that her childhood dream was “to be famous”.

According to the most recent data provided by Johns Hopkins University, there are around 78,000 confirmed cases of coronavirus infection in Iran, with more than 4,800 deaths reported.