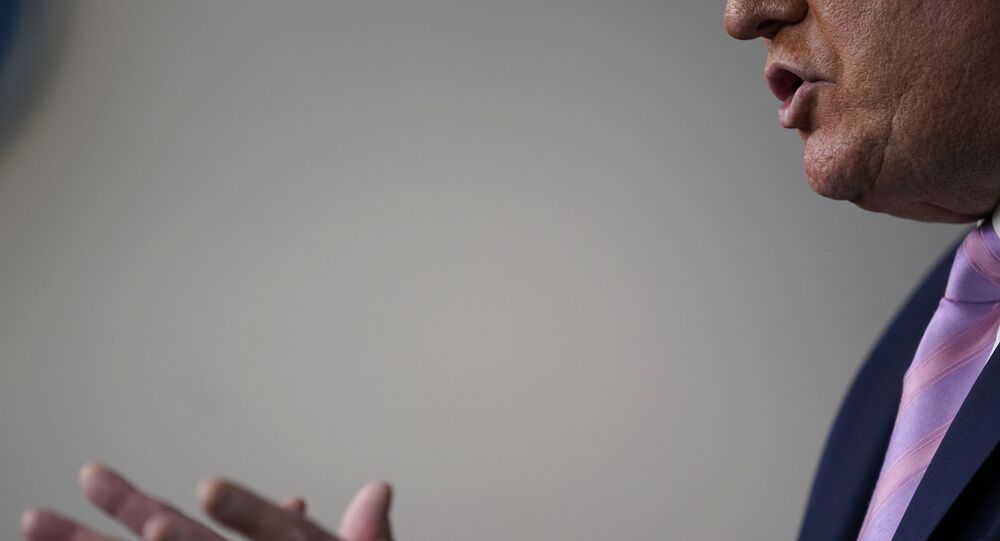 The White House has reportedly been weighing defunding the “China-centric” World Health Organisation, which, Trump thundered, issued “faulty recommendations” at the onset of the pandemic.

Public health professionals have appealed to President Trump not to halt funds for the World Health Organisation as the White House is understood to have been considering punitive measures on the international health watchdog.

According to Scott Gottlieb, Trump’s former Food and Drug Administration commissioner, this isn’t right time for it:

“I don't think this is a time to defund the WHO, given the fact that I think this is going to become an epidemic in the Southern Hemisphere, in parts of the world that don't have resources to deal with this kind of a global issue”, he explained Sunday on CBS’ “Face the Nation”.

Gottlieb added, however, that Trump had “raised a lot of valid concerns” about China's transparency and sincerity vis-a-vis the initial COVID-19 flare-ups.

In a separate interview on the same day, Tom Inglesby, head of Johns Hopkins University’s Centre for Health Security, went still further, stressing the critical importance of the WHO for the US at this turbulent time:

“The US needs the World Health Organisation to function properly”, Inglesby said on “Fox News Sunday”, before continuing: “It is the organisation that helps the world prepare and respond to this. We’re going to need the world to recover from Covid if we’re going to get normalcy back”.

Separately, David Nabarro, a WHO special envoy, called for unity in the face of the stringent health crisis on Sunday on NBC’s “Meet the Press”:

He brought up troubled businesses and communities affected across-the-board, before calling for well-directed joint efforts:

“I really do hope that all nations will not find any reason to make threats or other such things that will undermine our capacity to bring together all the best knowledge that we can find”, Nabarro said.

Before Politico reported last week about the US’ supposed plans to defund the WHO and create an alternative entity, WHO Director-General Tedros Adhanom Ghebreyesus and Trump exchanged a number of remarks.

First, POTUS tweeted his threat to revoke the US’ backing from the organisation, fuming that the WHO “really blew it”.  “For some reason, funded largely by the United States, yet very China centric. We will be giving that a good look”, Trump tweeted his intention Tuesday morning, before praising his own move to reject their advice on “keeping our borders open to China early on”.

“Why did they give us such a faulty recommendation?” he queried.

The WHO chief waded in by asserting that unity and solidarity are crucial in the face of the coronavirus woes.

“With unity, with solidarity, at a national level and global level, resources will not be a problem”, Tedros said last week, going on to thank the United States for its long history of support for global health.

The sweeping COVID-19 pandemic has seen as many as 1,700,000 confirmed cases around the world, according to fresh WHO estimates, with the death toll having to date topped 106,100.

The US is currently the worst coronavirus-hit country, with over 492,800 infection cases and at least 18,500 related deaths.

Trump Says He Will Decide When to Lift Coronavirus Lockdowns, Not State Governors