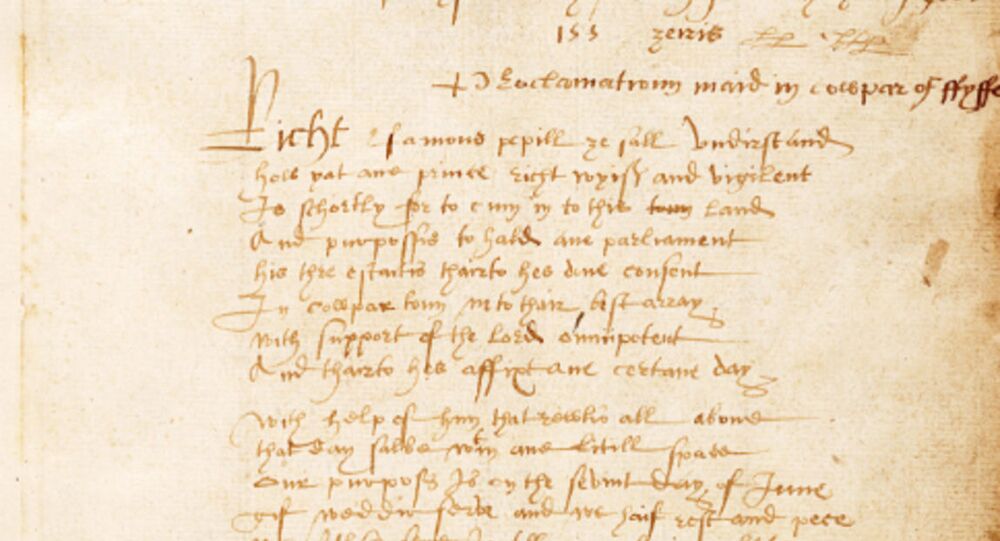 The COVID-19 pandemic has shut large portions of the population in their homes, bringing about immense frustration that may understandably make a person say a curse word or two. In a congruent situation nearly 500 years ago, one individual in isolation from a plague wrote down the first ever recorded “F-bomb” amid boredom and frustration.

It appears that the earliest written use of the F-word dates back to an almost 500-year-old composition known as the Bannatyne Manuscript. According to the British Library, the document, which dates back to 1568, is one of the most important manuscripts in medieval Scottish literature’s history, containing the only surviving copies of a multitude of texts.

The collection of poems was transcribed by bored student George Bannatyne in the 16th century while he was locked up inside his Edinburgh home due to a plague that had struck the city. A note at the end of his manuscript reads: “This buik writtin in tyme of pest / Quhen we fra labor was compeld to rest,” or, “This book was written in a time of plague / when we were compelled to rest from work.”

The priceless manuscript, which is kept locked up in the National Library of Scotland, will be shown in a documentary airing Tuesday entitled “Scotland - Contains Strong Language,” in which Scottish singer and playwright Cora Bisset tours the country in an effort to discover more about its relationship with swearing, the Daily Mail reported.

In the documentary, Dr. Joanna Kopaczyk, a historical linguist at Glasgow University, states that Kennedy’s jab at Dunbar is the earliest surviving record of the word 'f**k' in the world.

In a statement given to The Scotsman, a spokeswoman for the National Library said the manuscript remained in the possession of Bannatyne’s descendants until they gifted it to the library’s predecessor in 1772. She stated that “it has long been known that the manuscript contains some strong swearwords that are now common in everyday language, although at the time, they were very much used in good-natured jest.”

History is once again repeating itself with the pandemic, but recorded uses of the F-word are certainly easier to find this time around.

The Curse of the Maritime Empire: How Bubonic Plague Nearly Destroyed Constantinople