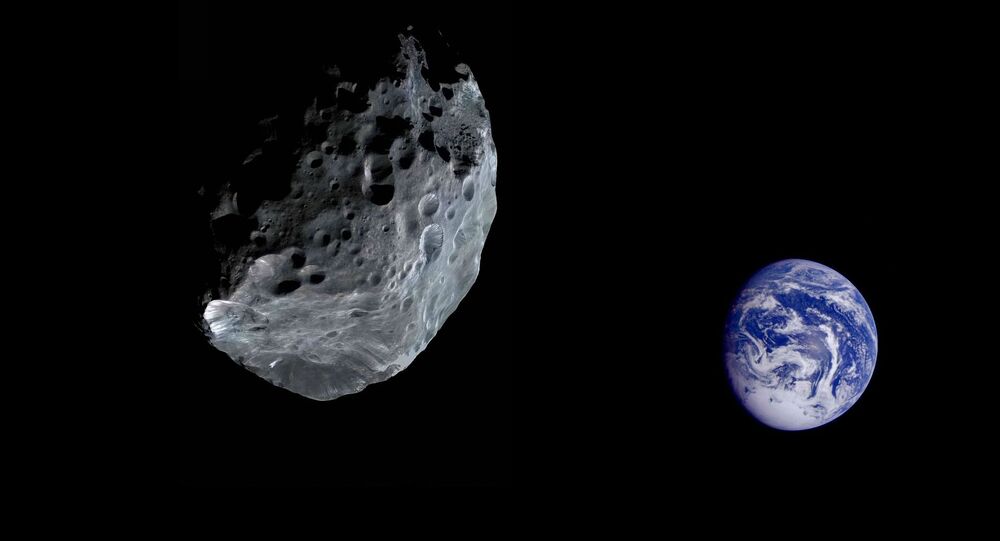 Does the Bible for Real Warn About Doomsday Asteroid?

With near-Earth asteroid and comet flybys having of late getting researchers’ attention, it has now emerged the grounds for it could even be there in the final chapters of the Bible about the Apocalypse.

According to Thomas Horn, a end-times connoisseur and SkyWatch TV show host, a catastrophic impact from space was implied in the Bible's Book of Revelation, and it might well be Asteroid Apophis, which is expected to fly by our planet in the late 2020s.

When speaking to Charisma News, Horn, author of the book titled The Wormwood Prophecy, cited his own prophetic experiences, with one involving a vision of “a giant, fiery dragon deep in the heavens, swimming like a serpent toward the Earth".

He went on to recount that at some point he realised he was looking at a gigantic rock that was racing toward Earth penetrating space.

“But as it was turning as it went through space; the way the Sun was lighting on the contours of it gave it the appearance that it was moving like a serpent through space", he recounted vividly.

In his piece for Charisma News as well his book, Horn says “it dawned” on him that Revelation 8 and the first four trumpet judgments appear to describe “the different stages of a singular event—a large asteroid impact on planet Earth”, which Horn predicted would come in 2029 in the form of the asteroid Apophis.

"Then the seven angels who had the seven trumpets prepared themselves to sound them. The first angel sounded, and there followed hail and fire mixed with blood, and they were thrown upon the Earth. A third of the trees and all the green grass were burned up (Rev. 8:6-7)", the end-times expert quoted from the final chapter of the New Testament, which depicts doomsday allegedly through the eyes of John the Apostle, the author of the piece.

However, college Professor Tom Meyer, who can recite more than 20 biblical books off the top of his head, believes there is no direct warning of a literal asteroid hitting Earth in the Book of Revelation.

Professor Meyer shared his own interpretation of the holy Christian text with the Express, saying:

"In regards to the second verse you mentioned, it likely has nothing to do with the literal asteroid", he started off suggesting that John is referencing here “the mountain like burning figure mentioned in the Old Testament book of Jeremiah: 'I am against thee, o destroying mountain, saith the LORD, which destroyeth all the Earth… and will make thee a burnt mountain'".

To prove the point, he noted that John, the author of the Book Revelation, otherwise called the Apocalypse, quoted or alluded to the Old Testament at least 700 times in his writing.

“Jeremiah is predicting the destruction of the 'mountain' which is representative of the literal ancient city of Babylon, the icon of all ungodliness", Meyer explained, further continuing that the “huge mountain... thrown into the sea” in Revelation 18 is more likely about the destruction of "Babylon" rather than some cosmic threat.

However, he admitted there could be an allusion to a space impact in earlier chapters in the Book of Revelation, as, for instance, Revelation 8:7 speaks of an angel sounding his trumpet and a torrent of blood mixed with fire engulfing the Earth.

"The first trumpet could be an asteroid, but the emphasis is not on the asteroid wiping out humanity, but destroying a third of the agricultural economy in ‘Babylon’", he shared saying the question is who or what Babylon is in the Book of Revelation.

Regardless, astronomers are certain Asteroid Apophis poses no tangible threat to the planet, as the celestial body will propel past the planet’s crust within 19,400 miles (31,300km) from Earth - 10 times closer than the Moon.

"The impact odds as they stand now are less than one in a million, which makes us comfortable saying we can effectively rule out an Earth impact in 2036", Don Yeomans from NASA’s Near Earth Object Programme Office said as quoted by the Express.