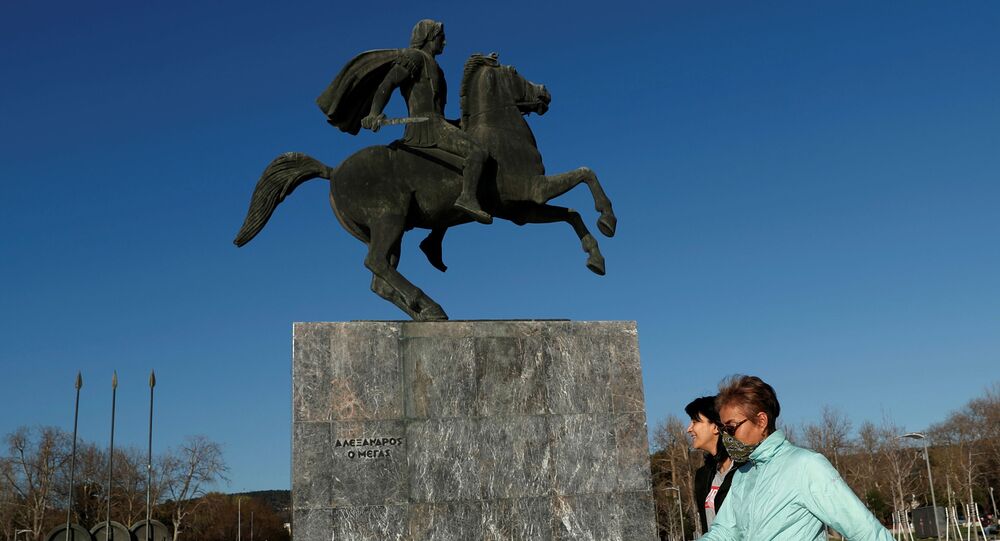 The final burial place of Ancient Greek King Alexander of Macedonia, the subject of long years of research and excavation work, has piqued curiosities for decades, and one historian’s claims on the matter even triggered a political controversy, as has been revealed.

Archaeologist Liana Souvaltzi, who has been professionally focusing on the life of Alexander the Great, claims she discovered his real tomb 20 years ago in Egypt, but has been blocked by the Greek and Egyptian governments ever since, the Express reported.

Her research suggests that the king's alleged wish for his body to be buried in the famed temple of the supreme Egyptian god Amun Ra, in the Oasis of Siwa, had been honoured: his purported last resting place was of huge significance in the ancient world, and this is where Alexander was allegedly “confirmed” as the son of Zeus, the king od gods in Greek mythology.

© REUTERS / Ronen Zvulun
Coins and jewellery from the time of Alexander the Great are displayed in Jerusalem March 9. 2015.

Ms Souvaltzi and her team, who was especially accredited to conduct their work in Egypt, found an entranceway adorned by lion statues in what was later found to be a vast and historically significant monument -  a grand, 525 square-metre Hellenistic royal tomb.

The lion heads spotted on the site suggested the burial place was that of an important figure, and on top of it, among the inscriptions and carvings was a symbol of Amun Ra and Greek ornaments, meaning the tomb could well house Alexander the Great’s remains.

One of the on-site inscriptions, which Souvaltzi believes was written by ancient mathematician and historian Ptolemy, one of Alexander’s close acquaintances and companions, refers to the elaborate transportation of the body to that tomb, despite no concrete name having been mentioned.

In 1995,  Alexander the Great's tomb was announced to have been found, although claims have since persisted of new research and other successful efforts to this end.

Souvaltzi told Greek media at the time that she had “no reservations about whether this is Alexander's tomb".

"But I am speaking to every Greek all over the world. I want every one of you to feel proud, because Greek hands have found this very important monument", she praised her Greek team’s effort, sparking a backlash from the Greek government, deeply emroiled in nationalist controversies.

Then-Prime Minister Costas Simitis urged the team to stop their research in Egypt and sent a Greek Embassy advisor to ask the Egyptian government to withdraw Ms Souvaltzi’s permission to excavate in the area, thereby blocking the work.

Alexander the Great, the legendary king of Macedonia and a famed military commander, conquered an empire stretching from the Balkans to modern-day Pakistan, by the age of 30.

In 2019, another researcher, Calliope Limneos-Papakosta, said, according to a National Geographic report, the site she had excavated could yield one of archaeology’s biggest prizes—the long-searched for tomb of Alexander the Great.

The Greek archaeologist said she had been scouring the Shallalat Gardens, a public park in downtown Alexandria, Egypt, for traces of the grand conqueror-turned-pharaoh for 14 years, before her team spotted a piece of white marble. The artefact turned out to be an early Hellenistic statue allegedly bearing every hallmark of Alexander.