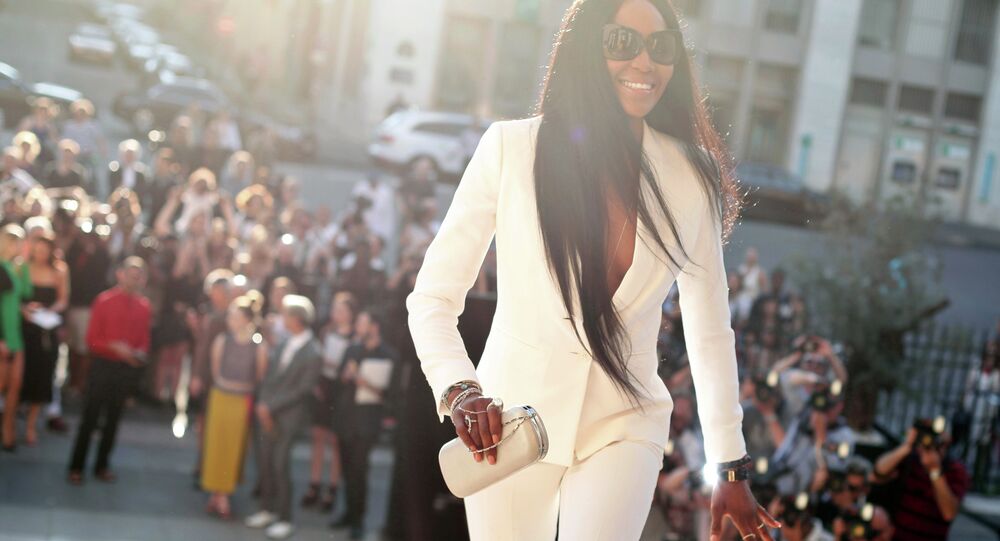 Self-confessed germophobe, Naomi Campbell appears to be taking all the necessary (and perhaps unnecessary) precautions to ensure she will keep the novel coronavirus at bay.

Forty-nine-year-old British supermodel Naomi Campbell has shared a series of snapshots showing what she sees as sufficient protection from the raging epidemic: in one she stands in an airport building clad in a full white hazmat suit, goggles and a mask to protect her mucous membranes, with her outfit made complete with a pair of pink surgical gloves.

In the last pics in the series, she poses thrusting her gloved hand while seated in a plane with a cape over her suit.

"Omg I hope that is not an airport blanket and it's your own. Those don't get washed properly", rapper Azealia Banks attempted to add a fly into the ointment. Yet, Naomi put her mind at rest:

“Mine, now in airport garbage", she said.

Netizens naturally couldn’t help but stress that scrupulous hygiene, which Campbell has long been known for, may not necessarily get in the way of fashion. Many rushed to unambiguously state that the two are not mutually exclusive, at least in the British model’s case:

“Naomi makes everything fashionable", one wrote, while another waded in expressing exultation:

“She said virus but make it FASHUN", another replied.

She said virus but make it FASHUN pic.twitter.com/0ol9j6NxPS

“A pair of scissors so you can cut your memes", another suggested by way of a new business venture.

Some meanwhile asserted she had greatly evolved, referencing a shot she shared last year, when she posed in surgical gloves with a pack of cleaning wipes. At the time, the YouTube clip showed her tirelessly cleansing her first class plane seat instantly went viral.

"Ma'am leveled up", another admitted.

Appraisal came in abundance, amid the mounting fears of the COVID-19 spreading:

“Airport fashion goddess", one remarked, with another exclaiming enthusiastically:

However, some took a dig at Campbell, accusing her of “insensitively” cashing in on what has been called “a pandemic" by the WHO.

“This virus isn't an opportunity for you to make bank on YouTube. How incredibly insensitive", one said.

This year has seen a rough start, with the novel virus, codenamed COVID-19 and first traced in late 2019 in the Chinese province of Hubei, continuing to travel the world.

Apart from China, among the countries most affected by the epidemic are South Korea, Iran and Italy, which is currently facing the worst outbreak in Europe: of 12,000 confirmed cases, 827 people have died and 1,045 recovered. The country is currently in lockdown, having been put under quarantine on 10 March.