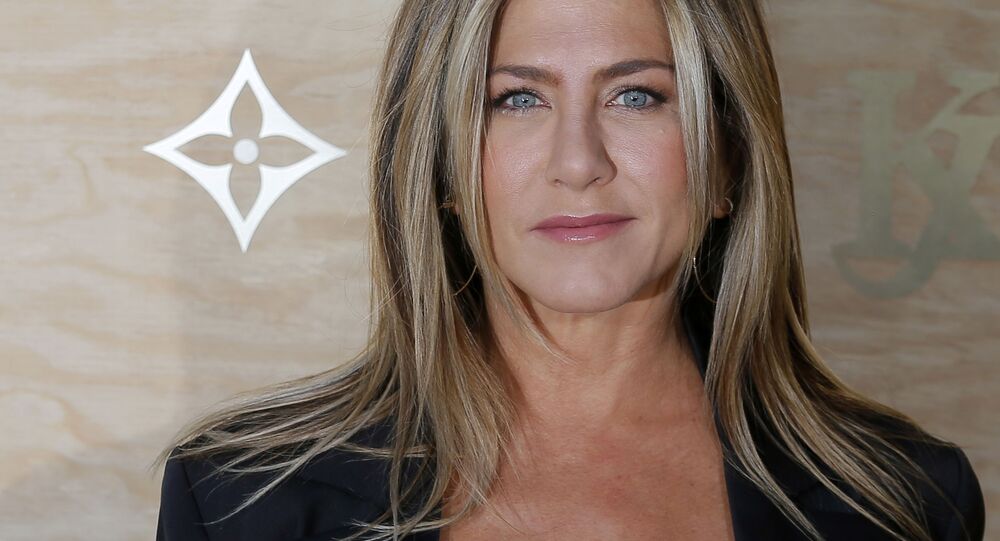 The star of Apple’s Morning Show has been in the spotlight recently as rumours have emerged that she may get back together with her ex-husband Brad Pitt. The two ran into each other at the Screen Actors Guild Awards and exchanged hugs backstage.

Friends star Jennifer Aniston apparently decided to prove once and for all that age is just a number in a passport when she slipped into smoking hot outfits during a photoshoot for the latest edition of Interview Magazine. In the cover photo, the actress, who turned 51 on 11 February, poses in a black leather jacket and high heel boots along with - ooh la la - no trousers.

In another photo Aniston is wearing an elegant skirt and a pink bra.

The actress also spoke with her friend and fellow actress Sandra Bullock for the March edition of Interview. Among other things, the two discussed their acting careers, romances, and the secret behind Aniston’s kindness and positivity. The actress said that growing up in an unsafe and destabilising household had made her realise that she doesn’t want anyone to experience negative emotions.

"I think that it comes from growing up in a household that was destabilised and felt unsafe, watching adults being unkind to each other, and witnessing certain things about human behaviour that made me think: 'I don’t want to do that. I don’t want to be that. I don’t want to experience this feeling I’m having in my body right now. I don’t want anyone else that I ever come in contact with ever to feel that'. So I guess I have my parents to thank. You can either be angry or be a martyr, or you can say, 'You’ve got lemons? Let’s make lemonade'", Aniston told Sandra Bullock.

Intentionally or not, the actress added fuel to rumours that she is getting back together with her ex-husband Brad Pitt by talking about her plans. "What is it that you haven’t done yet that you are looking forward to doing? Is it on a work level? Is it on a spiritual evolvement level? Is it all of the above?” Sandra Bullock asked Aniston, who replied: "My gut reaction was to say all of the above. It’s not so much what I see myself doing, but it’s more like a little screenshot in my brain, where I hear the ocean, I see the ocean, I hear laughter, I see kids running, I hear ice in a glass, I smell food being cooked. That’s the joyous snapshot in my head".

Brad Pitt and Jennifer Aniston were married for five years in what the media considered a rare Hollywood success. In 2005 they divorced amid speculation that Pitt had been unfaithful to Aniston with Hollywood star Angelina Jolie, whom he started dating right after the split.

© AP Photo / Chris Pizzello
In this June 5, 2007 file photo, Brad Pitt, right, a cast member in the film "Ocean's Thirteen," arrives with Angelina Jolie at the premiere of the film at Grauman's Chinese Theatre in Los Angeles. Angelina Jolie Pitt has filed for divorce from Brad Pitt, bringing an end to one of the world's most star-studded, tabloid-generating romances. An attorney for Jolie Pitt, Robert Offer, said Tuesday, Sept. 20, 2016, that she has filed for the dissolution of the marriage

In an interview with The Hollywood Reporter in 2015, Aniston said: "Nobody did anything wrong… It was just like, sometimes things happen".

Well, it seems that whatever happened between the two is in the past, as they were spotted together at a recent film awards ceremony talking to each other and exchanging hugs. Rumour has it that the two are already covertly dating each other.