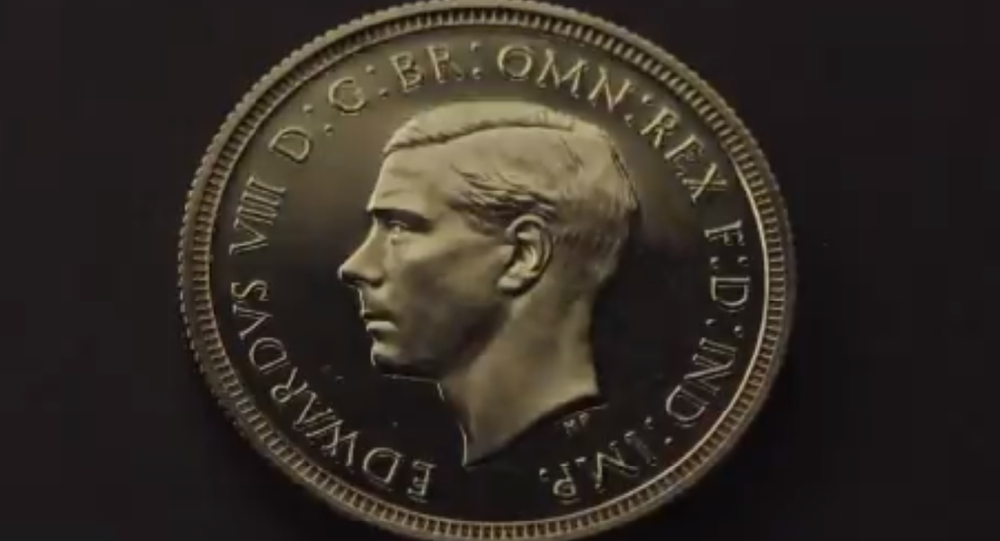 A rare, 1937 Edward VIII sovereign coin has been purchased by an unidentified private collector for $1.31 million.

The piece, which is now the most expensive British coin ever sold, was one of six made by the British Royal Mint when Edward VIII became King of the United Kingdom in 1936. At the time, the monarch insisted that the coin show the left side of his face, while other monarchs had the right sides of their faces displayed on coins.

​According to the Royal Mint, Edward VIII wanted to show his parting to “break up an otherwise solid fringe of hair.”

The coin was planned to be mass produced starting in January 1937, but when Edward VIII abdicated in December 1936, production was canceled. The king abdicated his throne just 10 months after having assumed it, in order to marry Wallis Simpson, a divorcee, which was forbidden at the time. His reign was the shortest of any British monarch.

In his abdication speech, Edward VIII said: "I have found it impossible to carry the heavy burden of responsibility and to discharge my duties as king as I would wish to do without the help and support of the woman I love."

The coin is made from 22-karat gold and is about 22 millimeters in diameter. It weighs around 8 grams.

"The Edward VIII Sovereign is one of the rarest and most collectible coins in the world, so it's no surprise that it has set a new record for British coinage," Rebecca Morgan, head of collector services for the Royal Mint, is quoted as saying by Reuters.

In another statement, Matt Curtis from the Royal Mint’s collector services said: "This Sovereign is significant not only because of its rarity, but because it sits at the heart of an international story and has been treasured by collectors in both the UK and US. The Edward VIII Sovereign is certainly one of the rarest coins in the world, but we hope it will help inspire others to look through their homes and see what treasures are hidden.”

Four of the remaining Edward VIII sovereign coins are housed in museums and institutions, and the other is privately owned.