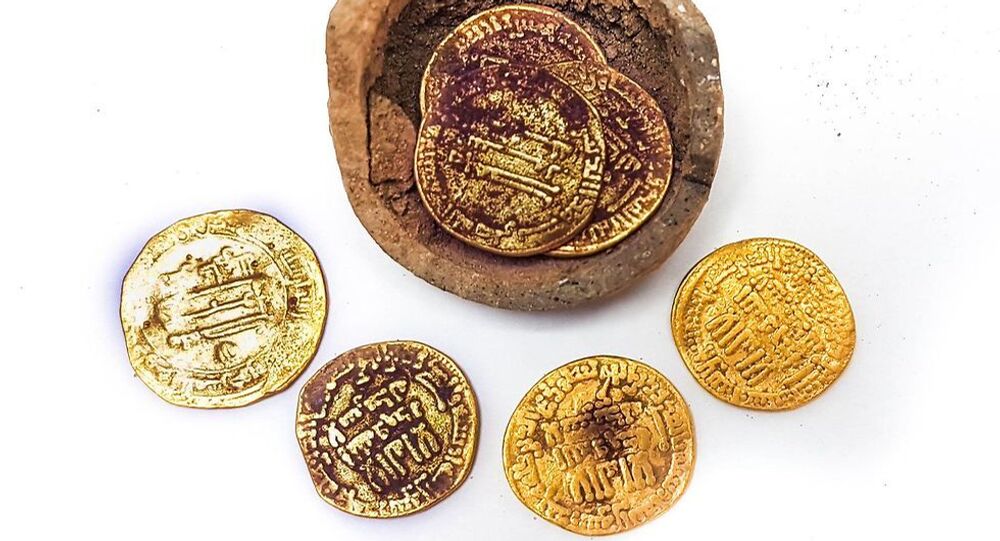 One of the coins found by the archaeological team turned out to be a dinar from the reign of Caliph Harun al-Rashid, the legendary Abbasid ruler mentioned in "Arabian Nights".

A jug full of 1,200-year old gold coins was recently discovered by a team of Israeli archaeologists working at an excavation in the city of Yavne, The Jerusalem Post reports, citing the Israel Antiquities Authority (IAA).

According to the newspaper, the discovery was apparently made "just before" the Hanukkah festival, during the excavation conducted in the area prior to the construction of a new neighbourhood.

"I was in the middle of cataloguing a large number of artefacts we found during the excavations when all of a sudden I heard shouts of joy," said Liat Nadav-Ziv, co-director of the excavation. "I ran toward the shouting and saw Marc Molkondov, a veteran archaeologist of the Israel Antiquities Authority approaching me excitedly. We quickly followed him to the field where we were surprised at the sight of the treasure".

As IAA coin expert Robert Kool explained, the coins apparently date to the 9th century AD, with one of them being a dinar from the times of Caliph Harun al-Rashid who, as the newspaper points out, was featured in the collection of Middle Eastern folk tales known as "One Thousand and One Nights" or "Arabian Nights".

"The hoard also includes coins that are rarely found in Israel," Kool remarked. "These are gold dinars issued by the Aghlabid dynasty that ruled in North Africa, in the region of modern Tunisia, on behalf of the Abbasid Caliphate centred in Baghdad."

Other artefacts found at the site included "a large amount of pottery kilns" that were apparently used to make jars and bowls, leading archaeologists to suspect that the coin jug was used by the potter who owned these items to store his savings.