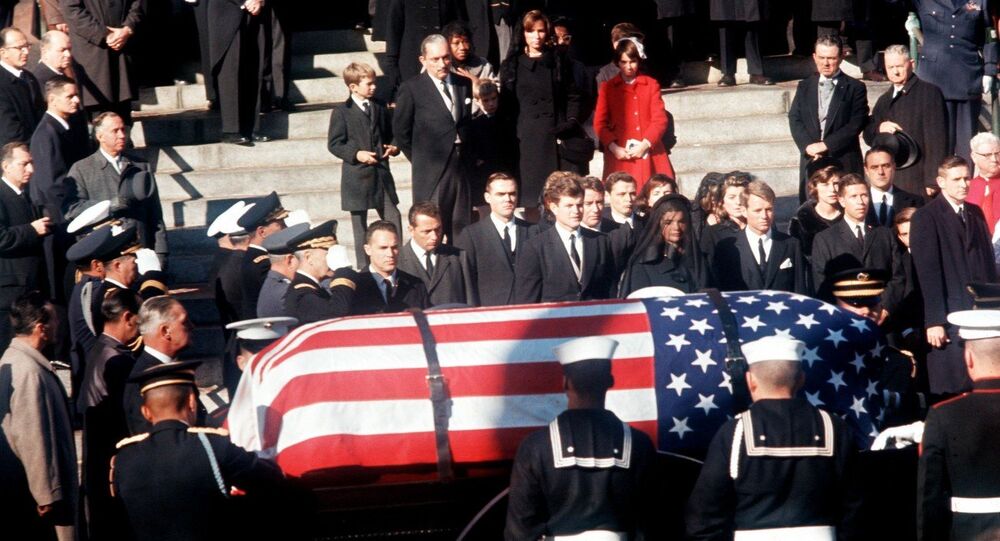 What Happened to Jackie Kennedy's Iconic Pink Suit She Wore When JFK Was Assassinated?

Fifty six years ago the 35th President of the United States John F. Kennedy was shot dead in Dallas, Texas. His wife and First Lady Jackie Kennedy accompanied him during the tragic trip and on the way to the hospital, with her pink suit covered in the president’s blood.

The iconic pink suit Jackie Kennedy wore that fateful day in 1963 when her husband John F. Kennedy was assassinated will remain hidden from the public until at least 2103 at the request of family members, the Washington Examiner reported.

The custom-made suit was worn by the first lady throughout the tragic day of 22 November 1963, including the motorcade ride, when the US president was shot dead, and while standing next to then-Vice President Lyndon B. Johnson as he was sworn into office following Kennedy’s assassination. Covered in her husband’s blood, Jackie Kennedy refused to take off the dress until her return to the White House in Washington DC, saying “let them see what they’ve done”.

Her outfit has never been cleaned. Kennedy was shot in the neck and head, with the first lady recalling a whole piece of the 35th president’s skull “coming off” as he was shot.

The pink suit, originally tailored by New York shop Chez Ninon to copy an iconic Chanel suit, was later donated to the National Archives by the Kennedys’ daughter Caroline in 2003 with a request not to display it in public so as not to “dishonor the memory” of her parents. It is now believed to be in the archives in a climate-controlled environment and is expected to remain there until at least 2103, after which members of the Kennedy family could decide whether to reveal it to the public.

© AP Photo / JACQUELINE ARZT
Top 6 Deaths of World’s Most Powerful and Famous That Spawned Countless Conspiracy Theories
Many conspiracy theories still surround the JFK’s assassination since Lee Harvey Oswald, who was arrested on suspicions of killing the president, was shot dead before he could be prosecuted. Jackie Kennedy later married Greek billionaire Aristotle Onassis and died at the age of 64 in 2004. Caroline Kennedy remains Jackie and John’s only living child since their son John F. Kennedy Jr. died in a plane crash at the age of 38.
...
Reddit
Google+
Blogger
Pinterest
StumbleUpon
Telegram
WhatsApp
05
Tags:
Jacqueline Kennedy, John F. Kennedy, US
Community standardsDiscussion