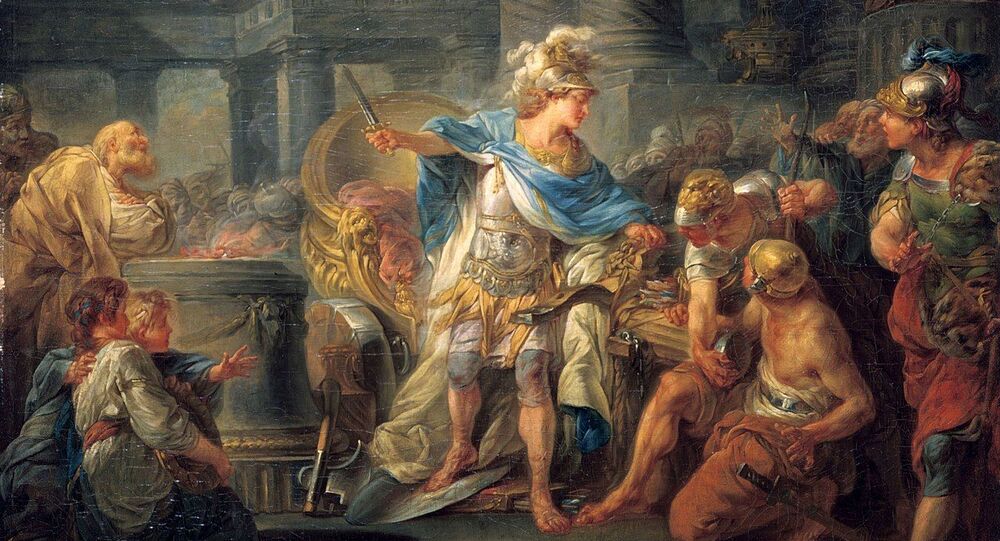 Between 334 and 323 BC, the great military commander and king of the ancient Greek kingdom of Macedon forged the largest empire in the ancient world, with his kingdom stretching from modern day Greece, Bulgaria and Turkey to Syria, Lebanon, Israel, Egypt, Iraq, Iran, India and much of Central Asia. And he did it all by his early 30s.

A team of researchers led by Dr. Thomas Gerasimidis of Aristotle University of Thessaloniki has completed nearly a quarter of a century of painstaking studies on the last days of Alexander the Great’s life, concluding that the conqueror died of pancreatic necrosis, and not malaria, typhoid fever or pneumonia, as previously thought, Sputnik Greece has reported.

Dr. Gerasimidis, a veteran professor of medicine, began studying Alexander’s final days in 1995, carefully analysing the symptoms experienced by the Macedonian king, as described by ancient historians including Arrian, considered one of the best sources on Alexander’s campaigns, and others ranging from Ptolemy and Plutarch to Quintus Curtius. He called this approach "evidence-based medicine."

After careful analysis, the professor concluded that severe sepsis, brought on by acute pancreatic necrosis, took the life of the undefeated commander, with the disease believed to have been brought on by gallstone disease, and the commander’s love for rich foods and alcohol.

“The onset of the symptoms was [characterised by] severe abdominal pain after a rich meal and wine, followed by fever, and a daily progressive, fatal degradation over fourteen days,” Dr. Gerasimidis explained, speaking to Sputnik Greece.

According to the researchers’ sources, on the first day of his illness, which struck him in Babylon (in present-day Iraq) while he was planning the conquest of Rome and Carthage, Alexander felt severe abdominal pain and had a fever, prompting doctors to induce vomiting, and follow that up with cold baths. But the commander’s fever, sweating and chills continued, eventually compounding into difficulty breathing, exhaustion, jaundice and delirium.

After fourteen days, on June 13, 323 BC, Alexander the Great died of severe sepsis at the age of 32, Dr. Gerasimidis concluded.

Along with the pancreatic necrosis diagnosis, the professor also rejected other hypotheses regarding Alexander’s death. He noted, for example, that malaria does not usually cause death so quickly, or with the symptoms seen in Alexander’s case. Pneumonia, meanwhile, is rarely known to cause abdominal pain. Typhoid fever and West Nile Virus were also ruled out by researchers due to the lack of appropriate symptoms.

The professor also rejected the recently proposed theory that Alexander was suffering from Guillain-Barre Syndrome (GBS), a rare autoimmune disorder in which the body’s immune system attacks it, causing symptoms ranging from weakness of the limbs and organ failure and ending with complete paralysis. The scholar maintained that high fever and abdominal pain were the main symptoms exhibited by the commander, according to the records, thus making the GBS theory moot. Furthermore, the view that Alexander experienced the onset of paralysis while maintaining his cognitive functions cannot be true, since all available sources pointed to a progressive loss of consciousness.

Finally, Dr.Gerasimidis challenged the theory that Alexander may have been poisoned, saying that given the comparitively primitive nature of the poisons available at the time, the king would have been dead within several hours if he consumed one, rather than going on to live and suffer another 14 days.

Alexander the Great’s decade-long campaign of conquest led to the spread of Greek culture, language and influence across much of the Middle East, the Persian Empire, western Asia and northeastern Africa. His reign spawned the ‘Hellenistic period’, during which distant territories spread across thousands of kilometres were subject to Greek influence. His legacy includes the founding of multiple cities, including Alexandria, Egypt, the construction of great temples, and the rise of trade between Europe and Asia.