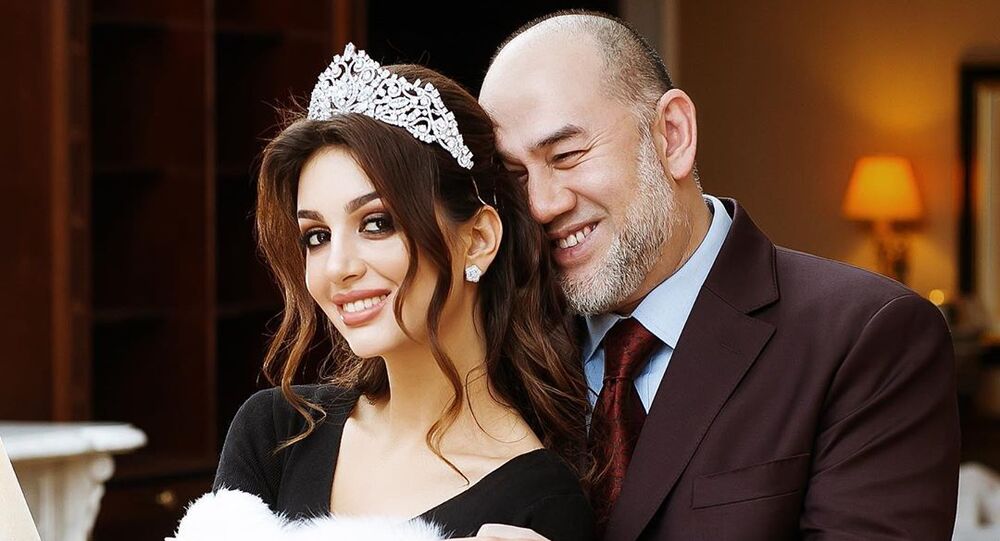 Russian model Oksana Voevodina and then-Malaysian King Sultan Muhammad V made headlines last year after their lavish wedding ceremony in Moscow attracted public attention. Their subsequent divorce left Voevodina alone with her now 4-month-old boy who has not been recognised by the former king.

The ex-king of Malaysia’s former wife Oksana Voevodina has decided to go to a Russian court to recognise the paternity of Sultan Muhammad V of Kelantan over their newborn child, the MailOnline reported.

Oksana Voevodina, former Russian model and "Miss Moscow 2015" beauty pageant winner, has reportedly filed a paternity petition with the Dorogomilovsky District Court of Moscow demanding to establish paternity of her 4-month-old boy with Sultan Mohammad V being indicated as the defendant. The judge is thus set to demand a DNA test from the former monarch and can accept the paternity claim if the ex-king refuses the test or fails to attend hearings.

The move followed Voevodina’s unrocognised settlement demands for a $30,000-a-month allowance for the child that was reportedly born in May and named Tengku Ismail Leon Petra ibni Sultan Muhammad V, as well as a $1.5 million Moscow apartment and a $10 million home in London.

The couple married in a secret wedding in Malaysia in June 2018 followed by a lavish ceremony in Moscow several months later. Voevodina, who converted to Islam and changed her name to Rihana Oksana Petra in order to marry the former king, was never crowned by the Malaysian rulers’ council.

The Sultan abdicated from the country’s throne in January 2019 amid pressure from the Malaysian public and increased publicity his marriage caused. While still remaining the ruler of Kelantan Province, he argued that he divorced Voevodina in June 2019 by using the irrevocable Islamic procedure Triple Talaq, reportedly granted by the Kelantan Syariah Court, according to the ex-monarch’s Singaporean lawyer Koh Tien Hua.

In an official statement later issued by the Royal Palace, Sultan Muhammad V expressed his regret over “the personal choices made in his private life” slamming his former wife over “lies on social media” and her “defamation” of the royal family, but did not outline the exact reasons for the couple’s divorce.

The sultan’s lawyer Koh Tien Hua also raised doubts over the boy’s paternity by saying that “there is no objective evidence as yet as to the biological father of the child".

The 27-year-old former model argued that she had received no confirmation of divorce and insisted on the former king being a father to her son Leon, previously saying in an interview with MailOnline that he “looks every bit like his father and he has this Asian-looking face”.

“I have nothing to prove to anybody because (Leon) is his son, born in a legal marriage and he was a planned and desired baby", Voevodina said.

Neither the Sultan nor his lawyer have commented on the paternity petition yet.