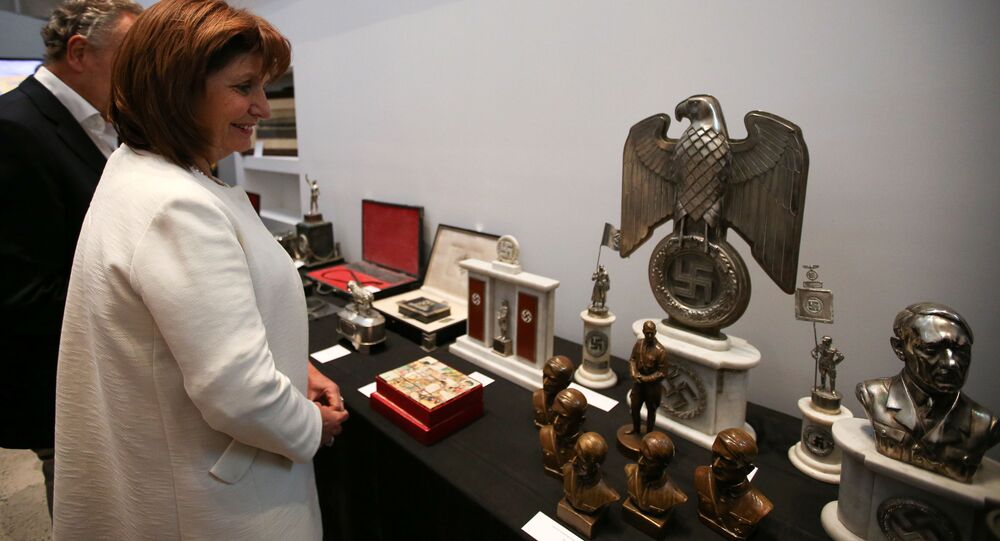 A large collection of Nazi artifacts found in the home of an antique collector and seller in 2017 will be put on display at Argentina’s Holocaust Museum in December.

The stash was retrieved by police from the Buenos Aires home of Carlos Olivares in June 2017; police uncovered a secret room in his home that contained more than 80 Nazi artifacts.

Some of the artifacts found included a photo of an aircraft taken by Nazi leader Adolf Hitler’s photographer, magnifying glasses, a Ouija board inscribed with Nazi symbols and cranial measurement instruments used by Nazis to determine “racial purity,” games to brainwash children into Nazism, a statue of an eagle standing on a base with a swastika symbol and sculptures of Hitler. The objects were confirmed to be authentic Nazi artifacts, according to Argentine and German experts.

“These elements will show part of that terrible story that was the Nazi genocide,” Marcelo Mindlin, president of the Holocaust Museum, said in a recent interview with Reuters. He also noted that the exhibit will be “in the service of transmitting democratic values, education and the fight for memory so tragedies like the Holocaust are not repeated,” AP reported.

Argentina is home to Latin America’s largest Jewish population. Many Jewish people fled there from Germany at the end of World War II.

The museum, which opened in 2001, will have a grand opening of the exhibit in December before the Nazi propaganda will be made available to the public for viewing.

“The great surprise of these objects was that they could not have belonged to anyone but someone in the Nazi hierarchy,” Mindlin noted.

Olivares’ home was raided after police started to investigate claims that he had trafficked illegal objects from China. He is currently being prosecuted in Argentina for transgressing cultural heritage protection laws.

Private ownership of Nazi artifacts in Argentina is not against the law; however, possession of such artifacts is illegal if they foment public racial or religious hate. It’s unclear yet if Olivares will be prosecuted for violating the country’s anti-discrimination law, AP reported.