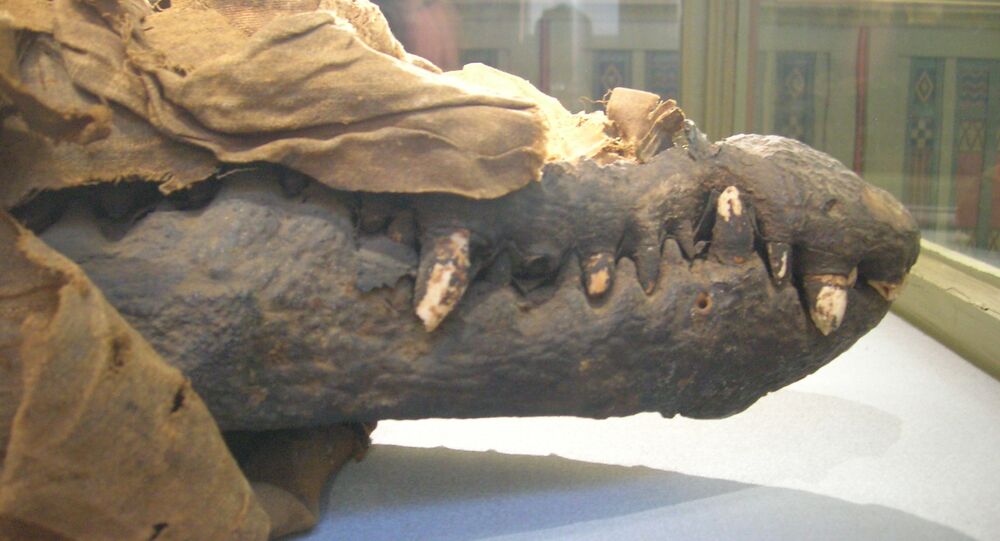 Scientists Reveal One of Secrets of Ancient Egyptian Mummies

The mummification of animals was a very popular procedure in Ancient Egypt, as people reportedly used their mummies as offerings to the gods during religious rituals.

Scientists at the Paul Valéry University of Montpellier, also known as or UPVM or Montpellier III, have studied a 2,000-year-old mummy of a crocodile and found that the animal was intentionally killed by a blow to the head for subsequent embalming.

“The most probable cause of death is a serious skull fracture on the top of [the] skull that caused a direct trauma to the brain. The size of the fracture, as well as its direction and shape, suggest that it was made by a single blow presumably with a … thick wooden club, aimed at the posterior right side of the crocodile, probably when it was resting on the ground", researcher Stephanie M. Porcier of France’s Université Paul-Valéry Montpellier III and her colleagues wrote in a new study.

It appears that ancient Egyptians hunted crocodiles specifically to mummify them.

In 2016, a 3D CT scan revealed that 47 smaller crocodiles were packed inside a giant 2,500-year-old crocodile mummy. Prior to this, traditional X-ray and CT scans showed that the artefact is made up of two juvenile crocodile skeletons.

The nearly ten-foot-long (3-metre-long) crocodile mummy has been on exhibit at the Netherlands’ National Museum of Antiquities in Leiden since 1828.

Was fascinated by the crocodile mummy pic.twitter.com/MpVkyfo7An

​In Ancient Egypt, crocodiles were commonly associated with Sebek, also spelled Sobek, a fertility god who was portrayed as a creature with a reptile head and a human body.