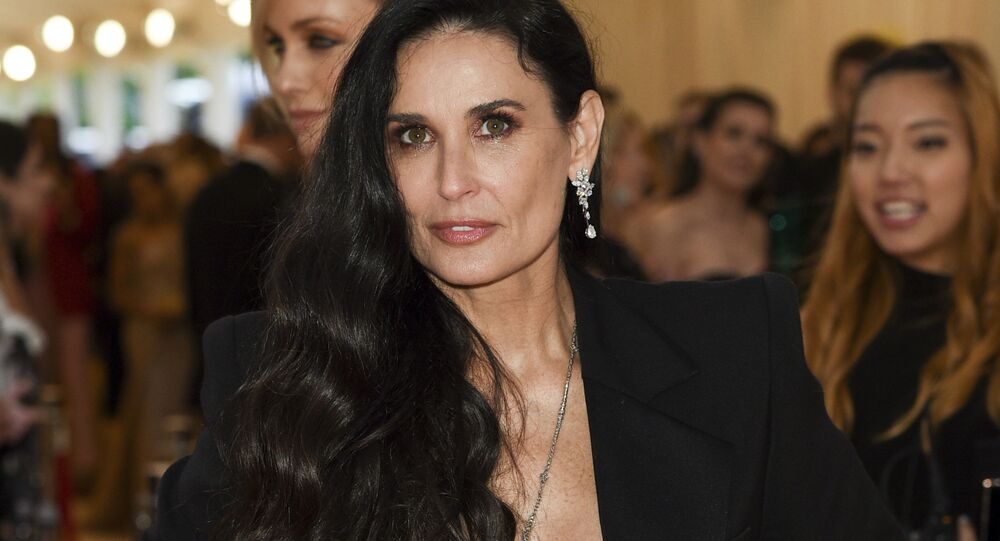 While the American actress’ memoir “Inside Out” is about to be released on 24 September, there are already some shocking details about Moore’s eight-year-marriage with US actor Ashton Kutcher circulating around the Internet.

Prominent US actress and model Demi Moore opened up about having had two threesomes with her ex-husband Ashton Kutcher during their time together, which she now bitterly regrets, she wrote in her forthcoming memoir “Inside Out”, as revealed by Radar Online outlet.

“I wanted to show him how great and fun I could be”, says the actress in her book, while noting that such sexual experiments were a “mistake”, as she did them for the “wrong reasons”.

Moore also revealed that these trysts were later used by Kutcher as an excuse to justify his infidelity with a 21-year-old woman whom he met back in 2010 while bowling with Moore’s daughter Rumer Willis. What is more, the actress found out about the affair, which took place at their marital home while she was away in New York filming Another Happy Day, from media reports.

“Because we had brought a third party into our relationship, Ashton said, that blurred the lines and, to some extent, justified what he’d done”, Moore reportedly wrote in her book, arguing that her husband did not seem entirely apologetic for the act, trying to “deflect blame” on to their sexual experiments.

Kutcher, who was 15 years younger than his wife, was later also spotted cheating on Moore with 22-year-old Sara Leal at his friend Danny Masterson’s San Diego bachelor party during their sixth wedding anniversary weekend, with details of the affair later being spilled by Leal to the media.

“I felt sick to my stomach”, Moore wrote in her book while commenting on the affair - which she learned about from Google Alerts.

Moore and Kutcher got married in 2005 after the two met at a friend’s party in 2003. Although they separated in 2011, their divorce was finalised only in 2013, with the actor marrying his That '70s Show co-star Mila Kunis two years later.