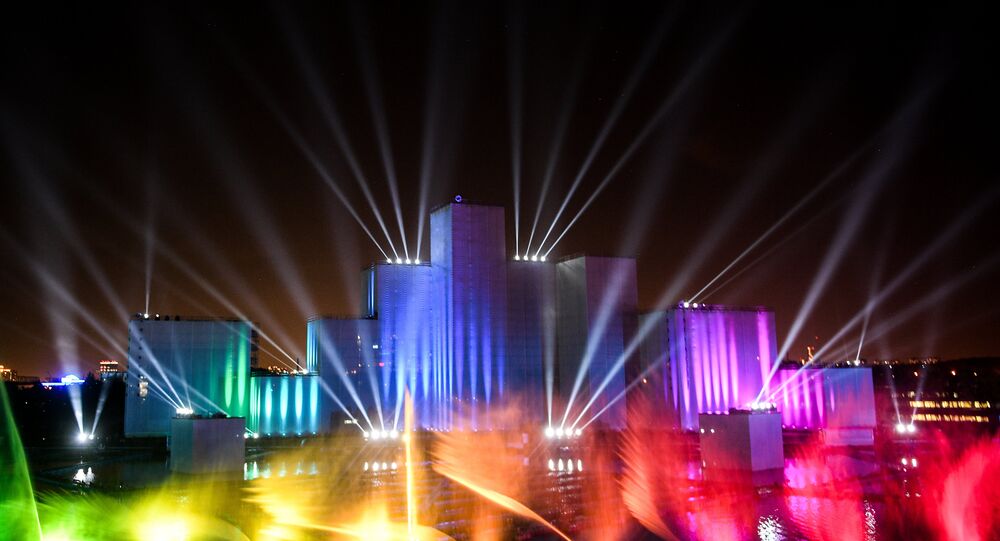 IX Moscow International Festival “Circle of Light”, the most desired and brightest open-air autumn event will immerse the Russian capital in an atmosphere of geometric and light illusions, creating a fantasy world, filled with the beauty of feelings.

The festival lasts from 20th till 24th September. Every year hundreds of thousands people from various countries and regions of Russia come here to see one of the most popular and largest festivals in the world personally; extraordinary 3D-mapping and pyrotechnics shows, light installations and laser projections, latest trends of computer graphics and magnificent works of participants of the International completion “Art Vision” attract people annually.

The grand opening of the festival will take place on 20th September at the Grebnoy Canal. It will be represented as a multimedia musical “Seven Notes”, which is a union of art sensuality and technology accuracy. This show brings up a question of how musical harmony helps people find a way to spiritual harmony.

The venue of the Grebnoy Canal, well-known to the festival’s spectator, will change the usual geometry resulting in an increase of the spectator zone area. The special construction will be erected above the canal: an arc connecting the two banks as a bridge; it will serve as a screen for video projections and a tool for light and fiery effects. More than one hundred burners and over two hundred fountains are allocated on the water surface as well as the water-fan screen, which visually approximates the musical’s characters closer to the audience. The ceremony will end with a 15-minute musical pyrotechnic show.

On September 21st and 22nd at the Grebnoy Canal, the “Seven Notes” and the pyrotechnic show will be held repeatedly.

The closing ceremony of the festival will take place at the same venue on September 24th. During the first part of this ceremony, spectators will watch the light novel “Code of Unity”, which carries the audience through the historical eras of our country in 25 minutes, as if it’s a time machine, and reminds us what makes millions of Russian people a united nation. For the first time, the residents of our country and spectators of the festival can become heroes of this performance.

For those, who want to participate, the organizers hold the acquisition of children photos (until September 5th), which will appear in the show on the main site of the “Circle of Light” festival. The final point will be a musical pyrotechnic performance; the high-altitude firework show, during which the star domes, with a diameter of up to 300 meters, will cover the night sky of the capital.

In the Centre of “Circle of Light”

At the heart of the capital are installed two locations, waiting for the guests.

The 270-degree panoramic venue on the Theatralnaya Square unites facades of three theatres (the Bolshoi, Maly and RAMT) in a single projection screen by special vertical planes. During the five festival days a light novel, dedicated to the Year of Theaters in Russia, the video mapping show “Spartak” and an architectural mapping show of the official partner of the festival, – the National Payment System “Mir”, – will be demonstrated there. Furthermore, the spectators will see the works of the international competition “Art vision” participants from five countries, which were concerned in “Classic” nomination.

For the first time in the history of the “Circle of Light,” its venue will be the Polytechnic Museum, which has recently  ‘thrown off’ all the scaffolding. The venue will welcome guests of the festival with architectural video mapping dedicated to the history of this famous museum and the importance of science and technology.

The Spaces Changed With Light

Connoisseurs of evening park walks have an opportunity to find their ways into “Circle of Light”.

For the first time, the Ostankino Park joined the festival with a route-journey through geometric illusions. Following this route, the park guests will see 15 thrilling installations of light and video projections. With the use of light effects, they will change the environment perception and transfer the audience in the world of the distorted reality.

The journey into the world of illusions should be continued in the "Fairy Tale Park" of the Kolomenskoye Open-Air Museum. This venue is especially loved by families with children. The territory of the museum with an area of more than one and a half hectares will turn into a fairy forest, filled with the magic light of installations, architectural and landscape 3D-mapping performances. The “Fairy Tale Park” route is fraught with a meeting with Jinns, acquaintance with animated puppets and dancing creatures, and an opportunity to become a spectator of the “Circle of Light” hidden between the dense thickets of the Kolomna forest.

Furthermore, a concert of the People’s Artist of Russia Dmitry Malikov will be held on 22nd September in Kolomenskoye. He will perform the author songs and musical compositions.

No less spectacular will be a visit to the park on Poklonnaya Hill. Spectators will see the premiere of “Space Odyssey” show presented on the panoramic façade of the Museum of the Great Patriotic War. The show will drive spectators in the interstellar space. Light travel will allow you to dive into the depths of space and give you an opportunity to get acquainted with its exciting and mysterious phenomena.

The last year shows, dedicated to the military history of Russia and the city of Moscow, will be shown on the façade of the Museum of the Great Patriotic War.

This year, the Museum the Great Patriotic War venue will become a part of the international “Art Vision” competition in the Modern nomination for the first time. The best creative works by participants from 11 countries will be presented on the facade of the building.

The subject of the “Art Vision VJing” contest will be audio-visual geometric images created by VJs from different parts of the globe. On Saturday evening, September 21st, in the Arbat Hall the competition participants will perform a show of synchronization of changing visual forms and music. International light and music party will be especially exciting for the club music fans.

The educational program had become a good tradition of the Moscow International Festival “Circle of Light”. On September 21st and 22nd at the Digital October Center within the masterclasses, panel discussion and lectures the leading specialists of lighting design and video projection will hold the lessons of “light geometry”, and share their experience of implementing large-scale project all around the world, they will also talk about the pitfalls of the organizational process of lighting performances and discuss technical innovations and current industry trends.

Opening Ceremony of International 'Circle of Light' Festival in Moscow