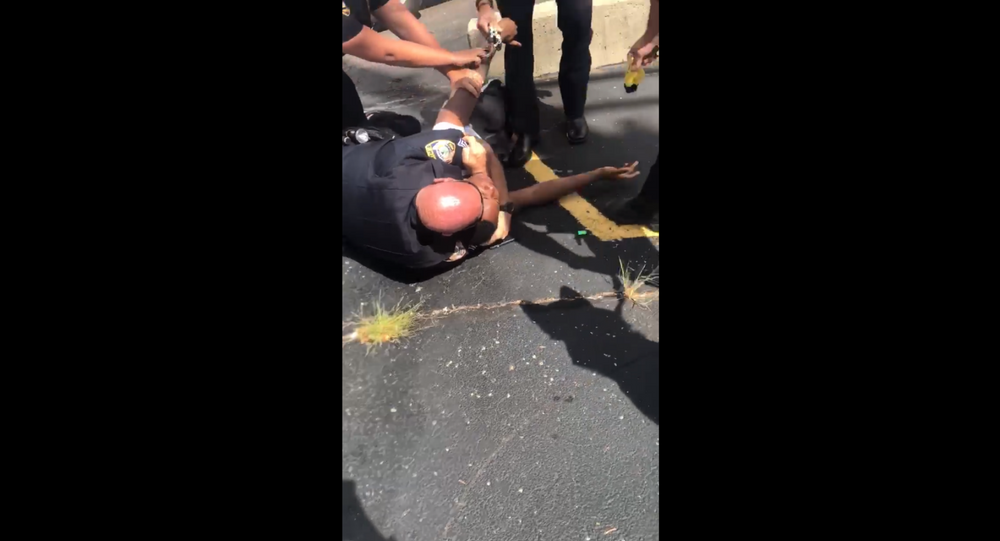 Newly surfaced cellphone footage has forced Illinois’ DeKalb Police Department to launch an investigation into the violent arrest of a suspect who was recently placed in a chokehold and then struck by a stun gun.

Video shared on Monday by Alyssa Retuerto shows her boyfriend, Elonte McDowell, being placed in a chokehold by an officer as two others attempt to place handcuffs on him during the Saturday altercation. Seconds after McDowell urges Retuerto to record the incident, a fourth officer deploys his department-issued stun gun on McDowell.

It’s at this point that Retuerto approaches an unconscious McDowell, telling him that she loves him and that “it’s okay.” An officer chimes in at this moment, tapping McDowell on the face and  saying, “You’re OK, big boy. That’s a nice fake.”

That same officer later instructs Retuerto to move away from the scene and to not “impede in my investigation.” Another officer later jumps in, saying, “Do you not understand that I have a dog in my hand and he will bite you?”

Taking notice of Retuerto backing away from the scene, an unidentified officer suddenly informs her that she’s “not free to leave.” She later shuffles closer toward McDowell, who still appears to be unconscious.

“He has a pulse, right? Like, you guys can make sure that he has a pulse?” a distraught Retuerto asks two officers kneeling down near McDowell. “Look at his face.”

Citing a release from the DeKalb Police Department, local news station WLS reported that officers zeroed in on McDowell after receiving a tip that he had a significant amount of marijuana in his possession. With a drug-sniffing K-9 unit in hand, officers reportedly found a bag containing between 1 and 3.5 ounces of weed, the Daily Chronicle reported.

According to the Daily Chronicle, the trespass charge is a result of officers pulling him over at the Lincoln Towers, from which McDowell was banned in November 2018.

McDowell was released on bond on Monday.

DeKalb County Sheriff Roger Scott revealed to NBC Chicago in an emailed statement that the officer who deployed the stun gun was a deputy from the sheriff’s office, and that at the time he was simply assisting officers from the DeKalb Police Department in the arrest.

Speaking to the news station, McDowell indicated that his interaction with officers quickly escalated after he was ordered to pull over his vehicle and officers refused to explain their reasoning. It was when officers attempted to put McDowell into handcuffs that he somehow fell to the ground.

In response to the growing community outrage, DeKalb interim Police Chief John Petragallo stated in a recent release that the DeKalb Police Department is initiating an independent review of the arrest. The unidentified officer seen placing McDowell in a chokehold has been reassigned to administrative work pending the investigation.

US Cop Gets Sprayed After Helping Struggling Skunk