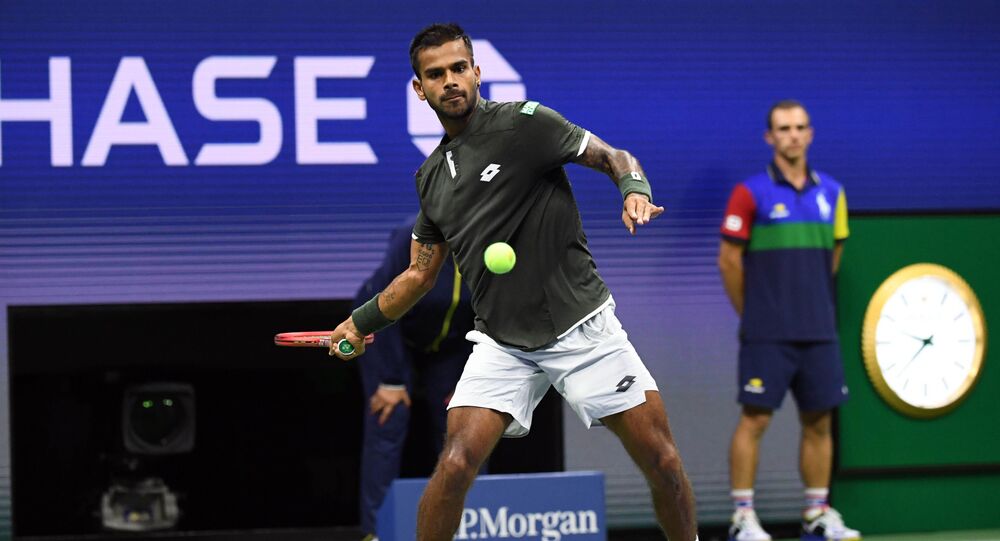 New Delhi (Sputnik): Indian tennis player Sumit Nagal’s spirited fight against World No.3 Roger Federer in the US Open 2019 clash on Tuesday has won the hearts of the twitterati. Although Nagal lost the clash against Federer, he did beat the 20-time Grand Slam champion 6-4 in the opening set of the match.

22-year-old Nagal, who is currently placed at 190th in the world rankings, was making his Grand Slam debut against Federer at the Arthur Ashe stadium in New York.

A stunner on Ashe! 😱

World No. 190 Sumit Nagal puts together a spirited performance to take the first set 6-4 off Roger Federer.#USOpen pic.twitter.com/hja7KhyXvE

The player, hailing from Haryana state, had the eyes of Indians glued to TV sets after beating his “idol” Federer 6-4 in the opening set of the match. However, the Swiss legend bounced back quickly, winning the next three sets 6-1, 6-2, and 6-4 to progress to the second round of the US Open for the 19th time in a row.

As Nagal became the first ever Indian to win a set off Federer in a Grand Slam, the twitterati were ecstatic at the feat. Heaps of praise poured in over Nagal, who is only the fifth Indian male player to feature in a Grand Slam singles main draw this decade.

The 22 yo Indian,first time qualifier to US Open, facing Roger Federer in first match itself, wins first set 6-4 !!

What a news to start the day with. This is already a big achievement , irrespective of the final result.

Any win against Federer is a confidence booster

He may or may not win the game, but he has won the heart.💓#USOpen2019 #SumitNagal #Federer

This is huge. In fact more than that.
For most Indians Roger is King and person to watch for in major #GrandSlam but fellow Indian is giving tough fight which is mesmerising as an Indian.@usopen #NagalvsFederar @nagalsumit go well champ🇮🇳@KirenRijiju
1st set Won👍

It's an achievement by itself to win a set against great Federer. We have talent but need to harness it. Wish Nagal success in future. Keep the Indian flag flying high.

In his earlier interviews, Nagal has often stated that he looks up to the 38-year-old Federer as his role model and idol.  The Haryana player had an unsuccessful 2018, when he was marred with injuries and was placed outside 300 in Association of Tennis Professionals (ATP) World Rankings. However, in 2019 Nagal managed to pull up his socks and break into the top 200 of the ATP rankings.