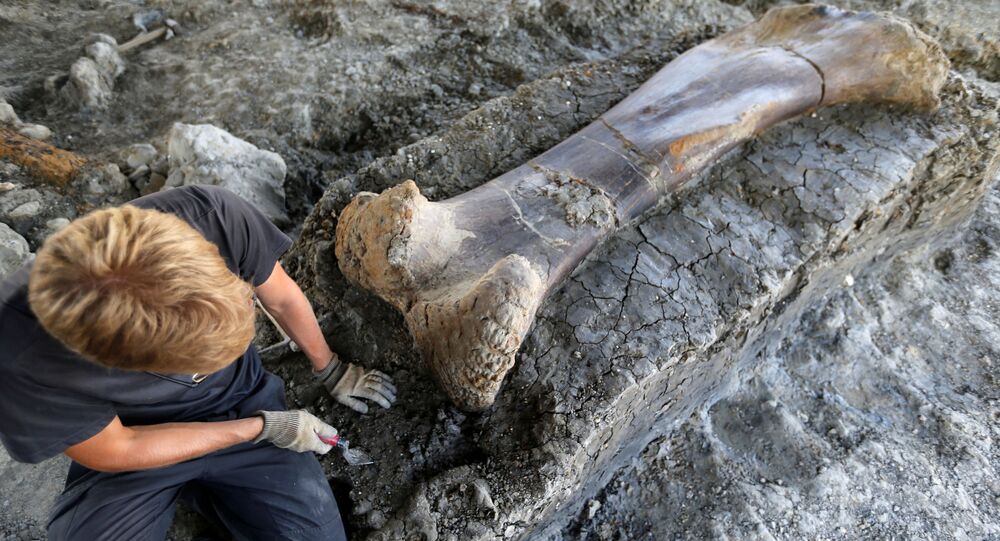 A dinosaur femur pulled from a French field might belong to the largest animal to ever walk the Earth, paleontologists are saying.

"We were wondering how big it was,” doctoral student Maxime Lasseron, who found the big bone in France’s Charente department, told AFP. “We kept saying, 'Oh, there's more!'"

The huge, fossilized dinosaur bone, measures in at 6.5 feet long and weighs 880 pounds. Scientists say it belonged to a gigantic sauropod - a long-necked herbivore - nearly 60 feet tall that might have been the largest land animal to ever live. France24 reporter Camille Nedelec described the creatures as a "gentle giant" that would have plucked leaves from the treetops "like a supersized giraffe.”

​"This femur is huge! And in an exceptional state of conservation. It's very moving," Jean-François Tournepiche, curator at the Museum of Angouleme, told Le Parisien. They’re now trying to figure out if it belongs to the same animal as one of the site’s other big fossil finds.

Ronan Allain, a paleontologist at the French Museum of Natural History in Paris, told Le Parisien the bone’s "preservation and perfect fossilization makes it really unique.”

"We get to see the insertions of muscles and tendons, scars. It's very rare for large pieces that tend to collapse on themselves, to fragment,” he said.

The bone was found in Angeac-Charente, a vast archeological site in southwestern France that was a marsh 140 million years ago, when the huge creatures roamed the Earth and the climate was much more tropical.

The first bone found there, in 2010, was also a huge thigh bone that was 7.2 feet long. Since then, nearly 70 scientists have combed the clay for the fossilized bones of dinosaurs whose bodies were trapped in the marsh’s mud. They’ve turned up more than 7,500 vertebrate bones and 66,000 fragments, and identified 45 different species. Scientists have also found preserved plants and dinosaur footprints.

"There was a river and large coniferous trees," Allain told AFP. "Amphibians, crocodiles and fish lived in the swamp, and on dry land, small and large dinosaurs. It was full of life."

Because of the richness of the site, it has been dubbed a “national treasure” of France.

The dig site already covers nearly 8,100 square feet, but another 43,000 square feet have been approved for digging, AFP reported.

"Another surprise for our 10-year anniversary," Tournepiche told AFP. "At this rate, we'll be busy for the next 30 years!"