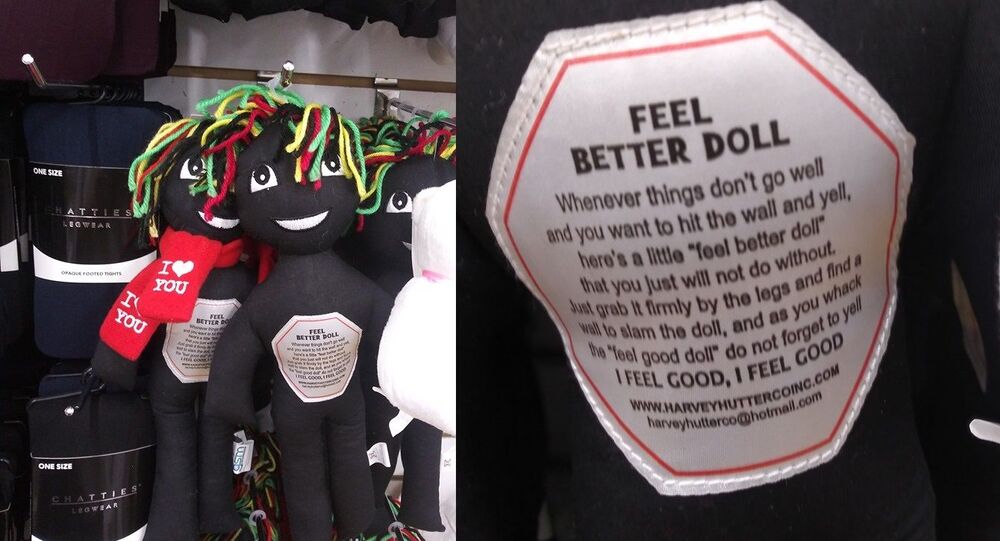 A New Jersey dollar store has discontinued the distribution of an anger management doll after a state assemblywoman highlighted the “offensive and disturbing” appearance of the item designed to be slammed against the wall.

On July 22, Assemblywoman Angela V. McKnight issued a statement denouncing the sale of a black cloth doll with “disturbing” play instructions by One Dollar Zone in Bayonne, New Jersey.

“Whenever things don't go well and you want to hit the wall and yell, here's a little 'feel better doll' that you just will not do without. Just grab it firmly by the legs and find a wall to slam the doll and as you whack the 'feel good doll' do not forget to yell 'I feel good. I feel good.'” reads the message stitched to the doll’s chest.

According to the release, the doll was promptly pulled from the shelves after McKnight discussed the issue in private with the dollar store’s general manager.

The doll, manufactured by Harvey Hutter Co. Inc., is said to invoke imagery that dates back to minstrel shows of the 1800s and 1900s. Similar stereotypical representations of black people also became household items in the form of “Sambo” figurines. In both cases, the characters were depicted as having charcoal black skin and large, generally red, lips.

One Dollar Zone President Ricky Shah confirmed to the Associated Press that some 1,000 of the dolls were removed from a total of three stores. However, in speaking with ABC News, Shah explained that the dolls also came in yellow and green and were part of a 35,000-unit purchase. It’s not known if the green and yellow dolls were also on display.

"This somehow slipped through the cracks," Shah told ABC News days after the incident.

It’s also unknown whether Harvey Hutter Co. Inc. still exists or was defunct by the time its dolls were pulled from the shelves, but the website written on the doll is inactive, and the phone line belonging to the company is disconnected.

Though the coloring of this particular doll is unique, the premise of abusing a stress relief doll is nothing new and has become a popular anger management technique also marketed by the “Dammit Doll” company.