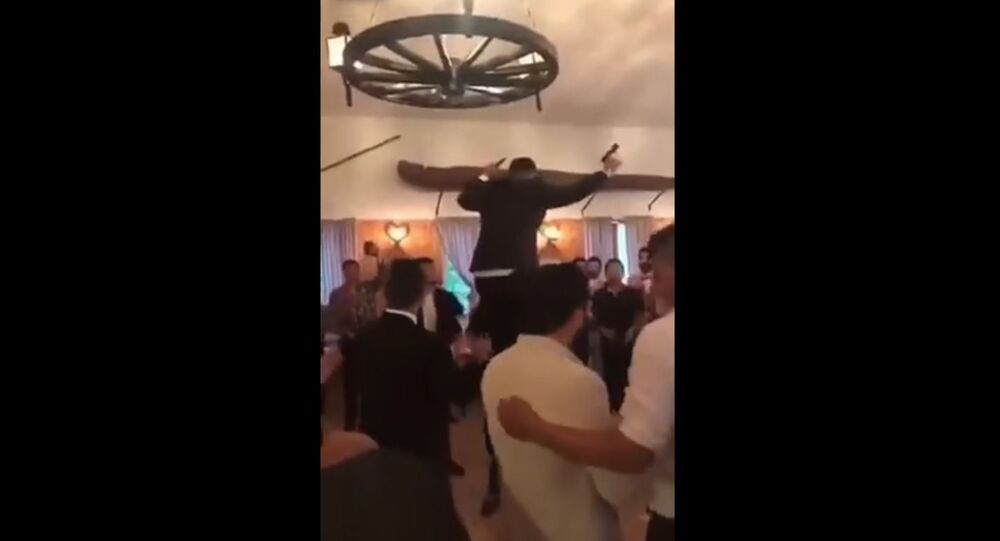 An unapologetic display of unholstered guns during a dance at an immigrant wedding party in the Swedish town of Filipstad has rocked the peaceful Nordic nation, sparking a debate.

In a clip published by freelance journalist Joakim Lamotte, who is known in Sweden for his investigative reporting on matters of immigration and sex crimes, a man is seen dancing to music in a crowd of people who appear to be of non-Swedish descent with raised arms and a gun in each hand. According to Lamotte, the gun dance was performed at a recent wedding in Filipstad, Värmland County.

Lamotte contacted landlord Alex Fornander who confirmed that Munkeberg homestead had indeed been rented out for a wedding party, but admittedly failed to see the problem.

“An immigrant couple was getting married. I had no reason not to trust them”, the landlord said, as quoted by Lamotte.

He subsequently asked what magazine Lamotte worked for and upon learning that he was a freelancer inquired what his problem was and whether he tried to scrape a living from it.

“The police were there that evening, and it was toy weapons”, Fornander told the newspaper.

The Filipstad police confirmed that a local man was dancing with two toy guns. While the event was described as “highly inappropriate”, the party was allowed to continue.

Nevertheless, the pistol dance video went viral, amassing thousands of comments and triggering strong condemnation in Sweden, a country with stringent gun laws and until recently no culture of going around armed. The news outlet Samhällsnytt wryly wrote about “new traditions being introduced”, while many Swedes voiced their indignation on Facebook.

“The new normal! And yes where are the women?” a user wondered at the gathering of suit-clad bearded men.

“Looks more like a wedding scene from a mafia movie. Pistols at a wedding, how tasteless”, another one commented.

“It is quite common to use guns at an Arab wedding. They may not be real, but still it looks so unpleasant”, yet another one mused.

“Had it been a Hell's Angels party, the police would had stormed the premises right away. No matter what, it is unnecessary to brandish guns. Can end badly in many ways”, yet another frowned.

By contrast, Lamotte's opponents suggested he was “ferretting out” morbid details to please his “racist crowd”.

A former reporter on national broadcaster SVT and Göteborgs-Posten columnist, Lamotte rose to national fame with independent investigations on matters related to crime, sex assault and immigration, intended to spark debate. While his Swedish-language Facebook page has over 200,000 followers (in a nation of roughly 10 million), Lamotte's brand of “Swish journalism” is often criticised by mainstream media. Lamotte's family had admittedly received death threats over his investigations.

Filipstad is a locality and the seat of Filipstad Municipality, Värmland County, Sweden, with about 6,000.

Sweden has tight gun control regulations. Most licenses for gun ownership are for hobby hunters.