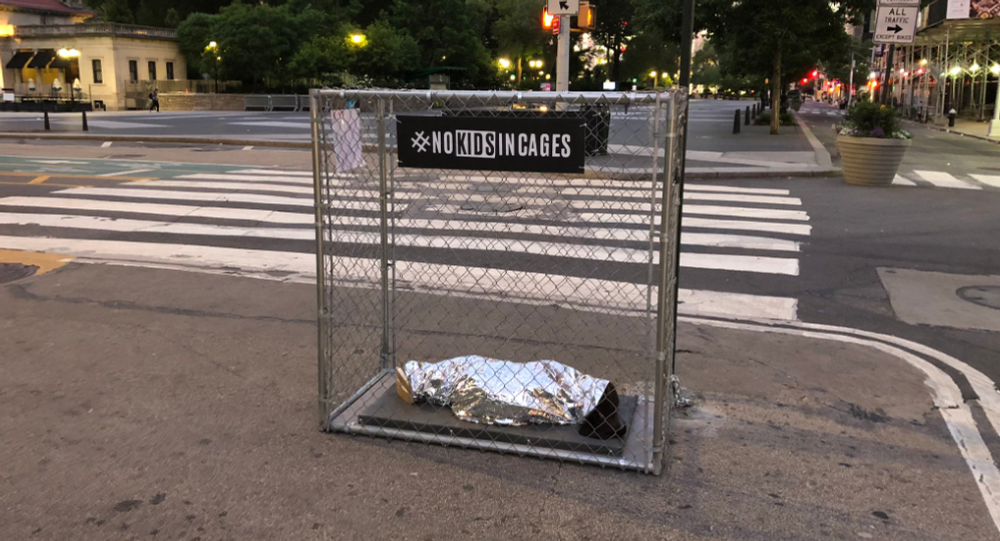 More than 20 cages with #NoKidsInCages signs containing child-sized mannequins wrapped in foil blankets were found scattered around Manhattan and Brooklyn in New York City on Wednesday.

The installations were placed outside the Barclays Center as well as media companies like CNN, Fox News and Newsweek in New York City as part of the #NoKidsInCages campaign by nonprofit agency the Refugee and Immigrant Center for Education and Legal Services (RAICES) and ad agency Badger & Winters.

​“Over 3,000 children were separated from their parents at the border. They live in cages. Sleep on the floor. They cry out and are not comforted … #NoKidsInCages is about the children. We cannot be a nation that separates families,” the campaign writes on its website.

​Some of the installations even included speakers which played a recording released by ProPublica last year of children crying out for their parents at the US-Mexico border after the Trump administration introduced its “zero tolerance” immigration policy.

​“We want to bring this back to the consciousness of the American people,” RAICES CEO Jonathan Ryan told HuffPost. “One of the many unfortunate consequences of the repeated traumatic stories coming from the border is that, as horrified and angry as people have been, we also become desensitized. It’s important for people ... to be confronted with the reality that this is about children, human beings, whose lives are forever affected.”

​“This is being done in our name by people who we elected,” he added. “And if we don’t do something to stop this, this will become who we are.”

“The litmus test of any society is how it treats children. By normalizing the detention of children in cages, we’re only going further down the path of forsaking the rights of all children,” Ryan continued in a news release to media outlets.

According to Ryan, about two dozen cages were placed in the city between 4 a.m. and 5 a.m. However, by Wednesday afternoon, the majority of the cages had been removed by the New York Police Department.

​Last year, the Trump White House announced its zero-tolerance policy, promising to pursue criminal charges to the fullest extent of the law against those who cross the US-Mexico border without correct documentation.

The policy led to the separation of around 2,000 immigrant children from their parents between April 19, 2018, and May 31, 2018, prompting criticism from human rights groups. Following political blowback over the practice of separating families, US President Donald Trump signed an executive order in late June that would stop separating migrant parents from their children at the US-Mexico border.

Are Trump's Threats Really About Immigration Reform or Money for His Wall?