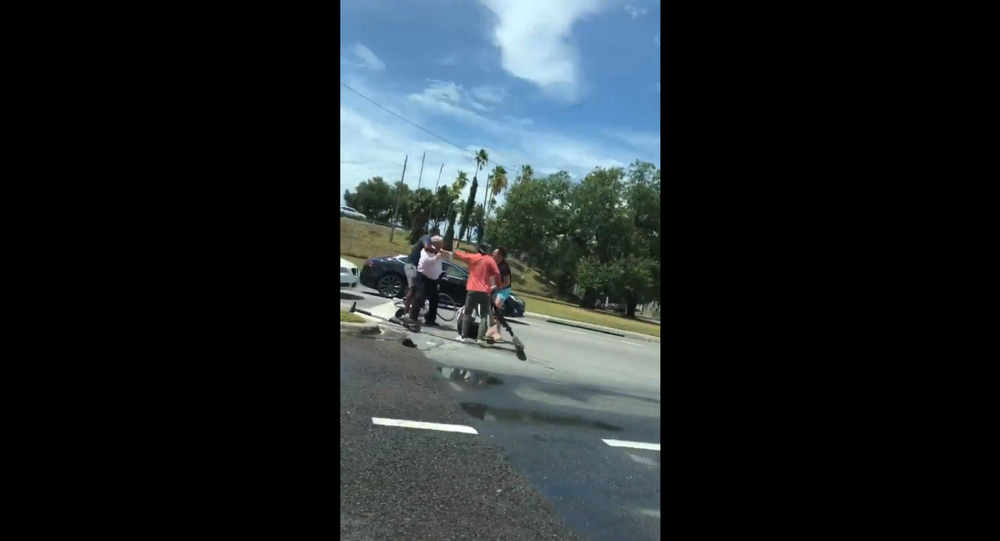 Floridian Jen Castrogiovanni was driving to work over the weekend, minding her own business, when she suddenly found herself with front row tickets to a brawl between a bicyclist and individuals riding on electric scooters.

Not wanting to miss out on capturing the fight on video, the shocked but curious Castrogiovanni did what so many others have done in similar instances - she pulled out her phone and hit record. The incident unfolded at the median strip at the intersection of Willow Avenue and Platt Street in Tampa, Florida.

The 11-second video begins mid-brawl, with a scooter rider in an orange shirt forcefully throwing a bicycle to the ground as a second individual in a black shirt appears to punch the bicyclist. A third individual with the scooter enthusiasts is seen standing off to the side, watching the scuffle unfold.

​At least one bystander is filmed attempting to aid the bicyclist, who is lying on the ground. Despite the man’s efforts, the bicyclist continues to be hit, as two of the scooter riders are seen holding back the bystander.

The video cuts off with the orange-shirted man appearing to warn the bystander against intervening.

Castrogiovanni told local news station WFLA that she saw the bicyclist throw the first punch and that she believes the incident was the result of a right-of-way dispute. "My speculation is that the scooterist got in the way of the bike," she said.

She went on to explain that she opted to record the fracas because she was under the impression that no one would believe her without the recording.

Officers with the Tampa Police Department were dispatched to the area; however, by the time they arrived, all parties had vacated the area. The Tampa Bay Times reported that the police report of the incident states, “Three white males on scooters were beating up a white male who [was] wearing a bike outfit.”

No other such incidents have been reported to the local authorities so far.

Local media reports indicate that the scooter program in the city is in its pilot year, and that many residents have grown increasingly upset with riders leaving the scooters in the middle of  sidewalks and riding the devices in restricted areas.