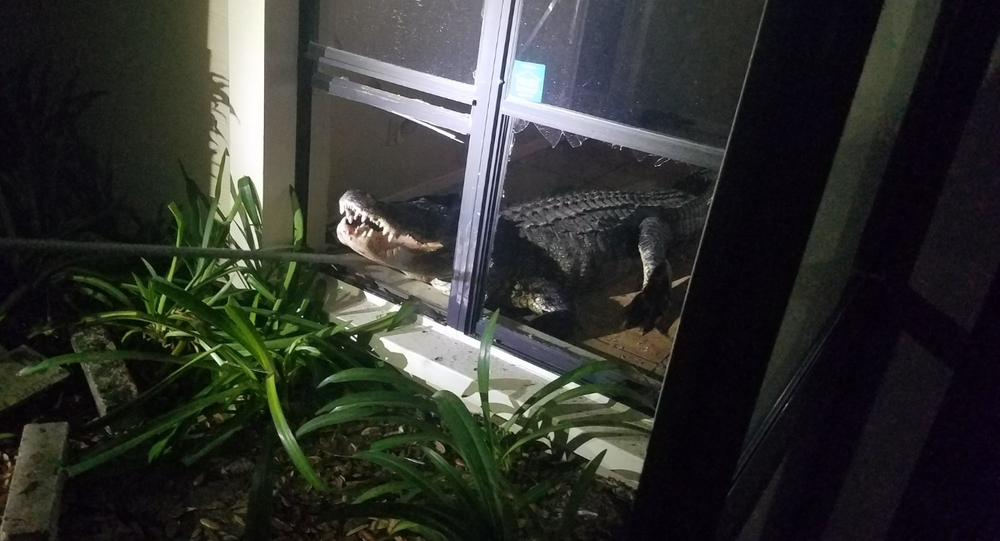 A woman in Clearwater, Florida, had a visit from an unwanted intruder on Friday: an 11-foot-long alligator that broke through some windows in her kitchen and crept into her home.

According to reports, Mary Wischhusen heard a loud crash at 3:30 a.m. Friday morning. When she got up to investigate the cause of the noise, she was shocked to find an 11-foot-alligator inside her kitchen.

"I heard this huge, monstrous crash, like the whole roof was falling in on the side of my house," Wischhusen told media sources. "I headed for the kitchen and as I got to the door of the kitchen, I had this beautiful face staring at me as though he belonged there."

According to a post on Facebook by the Clearwater Police Department, the gator broke into the home through some low windows in the kitchen.

"I decided I wasn't staying there, so I went back to my bedroom and closed the door and called the police," Wischhusen said. "I was hyperventilating a little, so what I did was I went on the computer and played games to settle down."

Shortly afterwards, 10 police officers and two trappers arrived at the home. They spent two hours coaxing the alligator to come outside before they were successful. The alligator suffered minor cuts to the shoulder in the process.

Photos shared on Facebook by the Clearwater Police Department show bar stools toppled over in the kitchen and red wine spilled all over the floors. The gator is displaying off all its teeth in another photo.

"I think after all these years, if you've been a nurse this long, you've seen everything. He was just added to the book that I need to write," Wischhusen said, crediting her career as a nurse for allowing her to maintain composure during the incident. "It's just amazing."

According to Florida Fish and Wildlife, alligator "courtship begins in early April, and mating occurs in May or June. Females build a mound nest of soil, vegetation, or debris and deposit an average of 32 to 46 eggs in late June or early July. Incubation requires approximately 63 to 68 days, and hatching occurs from mid-August through early September."

Too Close and Personal: US Woman Feeds 14-Foot Gator

Why Did the Gator Cross the Road: Close-Up Footage of Huge Reptile Leaving Pond