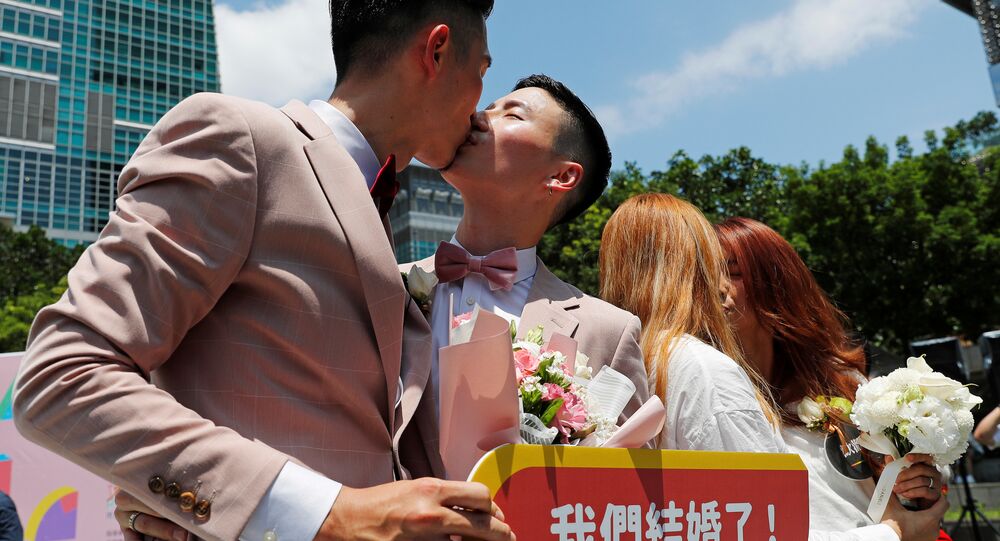 On Friday, hundreds of same-sex couples in Taiwan shared photos of tying the knot, just a few days after Taiwan became the first country in Asia to recognize same-sex marriage.

According to Channel News Asia, more than 500 same-sex couples made reservations to register their unions with local household registration offices Friday, the first day that the new legislation took effect.

Those kids wore skirts so these guys can get marry. There are no more heart warming story than this. Love is love. 🏳️‍🌈

Reporters flocked to the scenes, documenting history in the making as couples hugged and kissed while displaying their wedding certificates, with rainbow flags waving in the background.

​Shane Lin and Marc Yuan were the first gay couple to legally marry in Taiwan Friday, kissing outside the Xinyi District household in matching pink suits before getting married, CNA reported. Their wedding was officiated by gay rights activist Chi Chia-Wei, who petitioned a case that led to the country's ruling on same sex marriage.

Congratulations to Shane Lin and Marc Yuan for being the first gay couple to tie the knot after Taiwan became the first country in Asia to legalise gay marriage. May we continue to challenge power structures so that more people can live in the harmony and happiness that they deserve. Go Taiwan! #gaymarriage #fuckthepatriarchy #gayrights #challengepower #happiness #equality #harmony #sociology #anthropology #empower #selflove #selfworth #equalrights #gotaiwan #taiwan #gaymarriagetaiwan #firstforasia #finally #taiwangaymarriage

In May 2017, Taiwan's Constitutional Court declared that same-sex marriage constitutional, giving parliament two years to edit all laws to reflect the change.

​"I feel very lucky that I can say this out loud to everyone: I am gay and I am getting married," Lin told Reuters Friday. "I am extremely proud of my country, Taiwan."

Two women, Chien Li-ying Yan Shih-chi, who had married in a religious ceremony seven years ago became the second same-sex couple to register for a legal marriage at the Xinyi office in Taiwan.

"The day we waited for has finally come to allow us to take care of each other… This is our second marriage, now we not only have certification from God, but also society and familial recognition," the couple said, according to multiple reports.

"This is the right that we deserved from a long time ago," Chi told reporters, as happy couples basked in happiness.

"As a beacon in Asia, I hope Taiwan's democracy and human rights could have a ripple effect on other countries in Asia," he added.