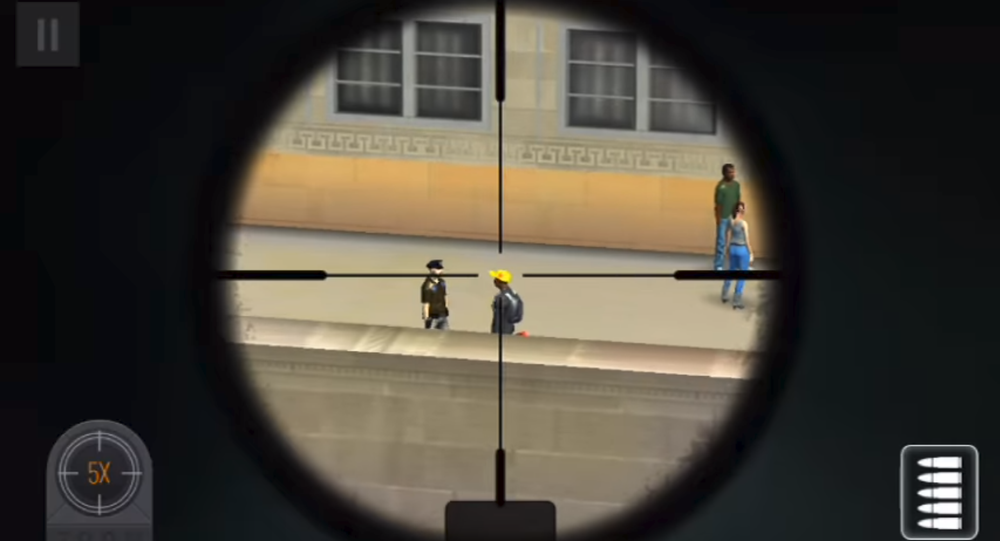 A video game for mobile devices called “Sniper 3D Assassin” was recently found to feature a twisted mission plot: assassinating a journalist who’s receiving sensitive documents from a police officer. After heaps of outrage, maker TFG has removed the mission.

"A journalist bribed a cop and will pick up a briefcase from the cop," says a mission briefing. "The briefcase is full of sensitive documents. Make him famous in a different way."

That's how "Sniper 3D Assassin," a popular first-person shooter available on Apple and Android devices, introduces the mission "Breaking News." The game was launched in 2014 by Brazilian tech firm TFG, and has 12 million reviews and a 4.5-star rating, the Washington Post reported.

"Take your sniper, aim and start shooting your enemies," says the game's tagline in the app market. And that's about all you do to play: pick up a sniper rifle and try to pick off a slew of bad guys, presumably for the good of mankind, or something.

The Post notes that by the time you get to the "Breaking News" level in the game, as a professional sniper you've gunned down an alleged gunman who killed several people at a pizzeria last year, a thief who stole a backpack from a tourist, three guards around a gang's armory and "without a trace of irony," the Post notes, another person with a sniper rifle who's gunning down innocent people.

As you pull the trigger to shoot the hack, a slow-motion camera follows the bullet from the gun barrel to its target, with the journalist's bloody corpse being overlaid with level stats.

Once you shoot down the journalist, though, you're greeted with the congratulatory, Schwarzeneggeresque quip: "THAT'S A COVER STORY."

Gamer Rant reported Monday that, following widespread outrage both online and in the press, TFG had removed "Breaking News" from the game.

"Our game Sniper 3D Assassin is fictional and is intended for mature audiences," TFG spokesperson Michael Mac-Vicar told HuffPost. "We work to create games that bring fun and entertainment to users all around the world. As such, we take feedback from our players very seriously."

The New York Times' Jamal Jordan tweeted about the game on Saturday after he found his 10-year-old nephew playing the level.

My nephew let me play an iPad shooting game with him. He chose the mission: It’s called “Breaking News,” and the objective is to shoot a journalist who just received documents from a police officer.

The goal is to make the journalist “famous in a different way.” pic.twitter.com/nQy4Hzq97r

​"We had a very long talk after," Jordan told the HuffPost.

Oh and by the way, journalists don't pay for information or source material — it goes against the foundational ethics of our trade.

The Post noted that the game doesn't seem to align with the Apple Store's guidelines for games put on the exchange.

"If you're looking to shock and offend people, the App Store isn't the right place for your app," Apple notes. "Apps should not include content that is offensive, insensitive, upsetting, intended to disgust, or in exceptionally poor taste," such as "realistic portrayals of people or animals being killed, maimed, tortured, or abused, or content that encourages violence."

"Enemies' within the context of a game cannot solely target a specific race, culture, real government, corporation, or any other real entity," the guidelines say.

The game especially raised eyebrows since it comes in the wake of renewed hostility toward journalists, stirred up not in the least by the White House.

US President Donald Trump has made a steady practice of calling journalists "the enemy of the people" and several terrorist attacks on newsrooms have happened or been attempted in recent years.

Last June, a disgruntled Maryland man opened fire in the newsroom of the Capital Gazette in the state capital of Annapolis, killing five people and injuring two more. According to the Baltimore Sun, a letter the shooter sent to local courthouses said he intended to kill "every person present."

Last October, a pipe bomb was found in the CNN mailroom in New York, addressed to former CIA director John Brennan, who works as an analyst for NBC News and MSNBC.

This past February, police apprehended Christopher Paul Hasson, a US Coast Guard lieutenant who they say was planning a string of terror attacks and assassinations of political and media figures, including popular journalists like MSNBC's Joe Scarborough and CNN's Don Lemon.

Five People, Including Teenagers, Killed in Shooting in Brazil - Reports