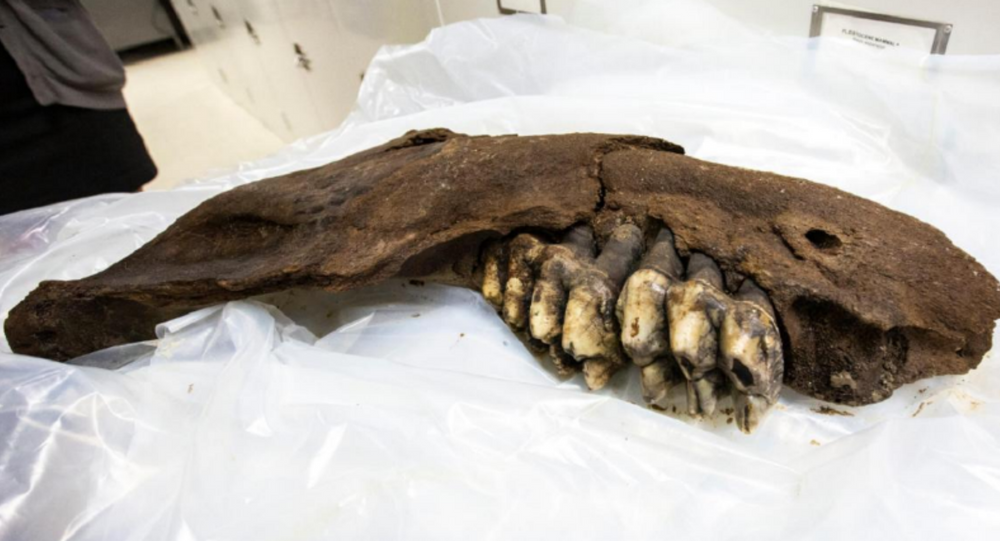 The jawbone of a mastodon, a prehistoric, elephant-like species believed to have lived in North and Central America around 34,000 years ago, was recently stumbled upon by a teenager looking for arrowheads in southern Iowa on farmland.

According to the Iowa City-Press Citizen, the 30-inch bone of the extinct animal, which is believed to have stood at around seven feet tall, was donated to the University of Iowa Paleontology Repository last week.

The bone was donated anonymously because the farmers who own the land where it was found did not want people trespassing on their property in search of other prehistoric remains. It is unclear how the owners of the property and the unidentified teen who discovered the bone are connected.

Tiffany Adrain, collections manager at the University of Iowa's Paleontology Repository, said that mastodon remains are common in Iowa, especially along waterways.

"I think people are finding stuff all the time," she recently told the Iowa City-Press Citizen. "Maybe they are out canoeing or fishing on a bank. Farmers, in particular, on the land can spot things pretty easily."

The owners of the land also found mastodon remains while fishing on their property decades ago, according to the Iowa City-Press Citizen.

© Photo : naturevideo/youtube
Prehistoric Lizard Brought Back as Robot Thanks to Science

The repository also houses remains of other large mammals that lived in what is now Iowa around 150,000 years ago, including giant ground sloths, giant beavers, short-faced bears, bison and camels.

According to New World Encyclopedia, the term mastodon refers to any "extinct, elephant-like mammal comprising the family Mammutidae."

Mastodons had long tusks, flexible trunks and large legs. Adult American mastodons stood between seven feet and 10 feet high and weighed as much as six tons. The cause of the mammal's extinction is unknown, although there are multiple theories, including the presence of Paleo-Indian peoples, who may have hunted them to extinction, or even bovine tuberculosis, a disease caused by the Mycobacterium bovis bacterium.

The University of Iowa's Paleontology Repository did not immediately respond to Sputnik's request for comment.