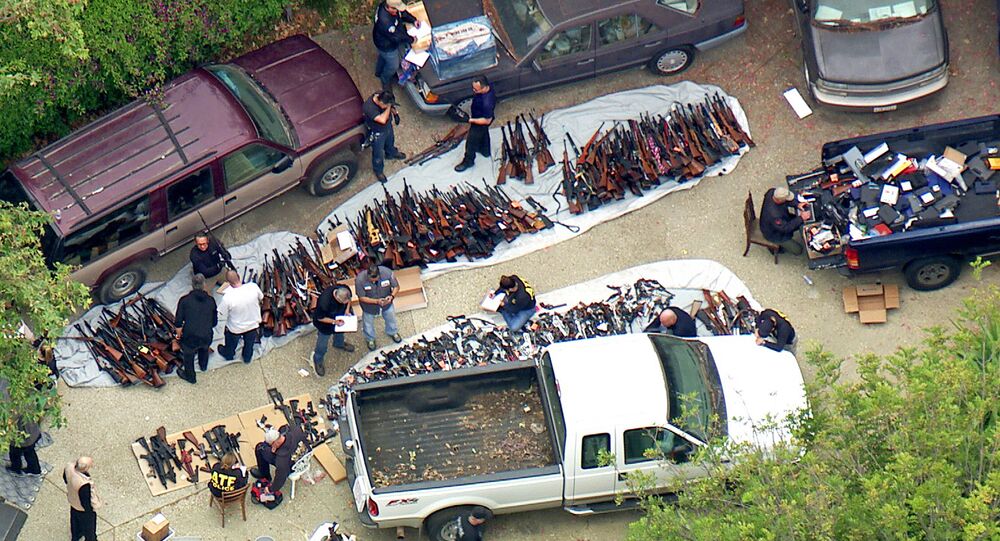 According to officials, the home is listed as being owned by Cynthia Beck, who has three daughters by Gordon Getty, an American businessman and the fourth child of US oil tycoon J. Paul Getty. Some 20 years ago, Beck was accused of having an extramarital affair with Getty. Authorities decided to investigate the house after receiving an anonymous tip that guns were being manufactured, cleaned, modified and sold at the mansion.

​At the time of the police raid, the only individual inside the home was 57-year-old Girard Saenz, who was arrested on suspicion of illegally manufacturing, distributing and selling firearms. According to public records, Cynthia Beck owns properties in Los Angeles and San Francisco, some of which she co-owns with Saenz. Saenz has also been described as Beck's "longtime companion," the Los Angeles Times reported. It is unclear whether Beck was aware of the guns in the home.

According to reports, it took 30 law enforcement officials over twelve hours to catalog and remove the weapons from the house. The guns included AR-15 military-style automatic rifles,.44-caliber handguns and.357 magnum revolvers, just to name several, as well as thousands of rounds of ammunition.

​"It's beyond comprehension that somebody can have so many weapons in a residence like this, in a neighborhood like this," LAPD Lt. Chris Ramirez told reporters, the New York Post reported.

According to investigators with the federal Bureau of Alcohol, Tobacco, Firearms and Explosives, Saenz was illegally selling firearms, although it is unclear what methods and tactics he used. He was arrested by police on Wednesday but released after posting a $50,000 bond.

In 2017, Saenz was arrested on suspicion of brandishing a firearm in Malibu, California, but the case was dropped after those involved told deputies they were not interested in pursuing charges.