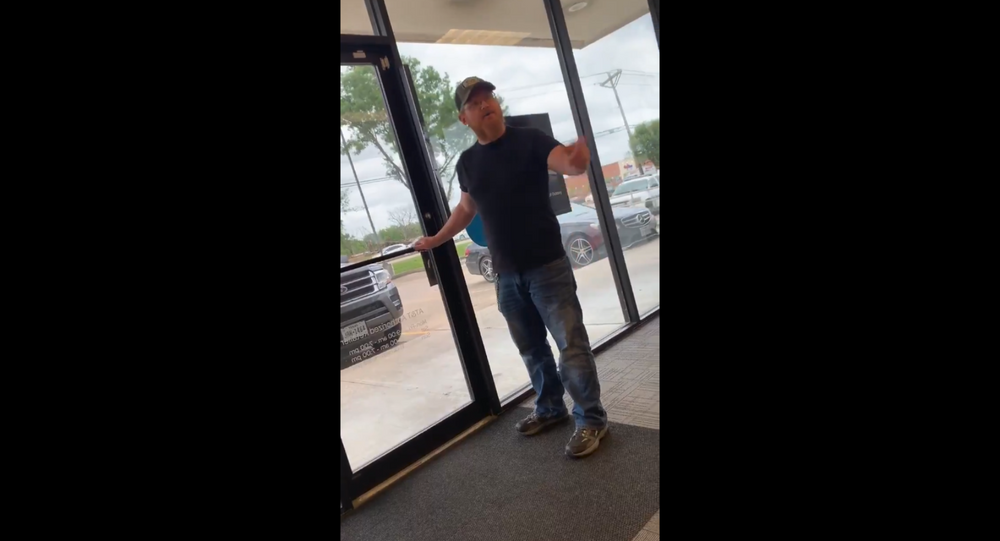 ‘I Been Killing His Kind': US Man Goes on Anti-Arab Rant, Gets Arrested (VIDEOS)

Texan Joey Christian wound up behind bars this week after he was caught on video slinging racist remarks at an AT&T employee in Friendswood, Texas, because he was unable to establish an account with the company.

The incident unfolded on Tuesday at roughly 6 p.m. local time, when Christian arrived at the store to help his nephew, who was reportedly unable to purchase a phone because he lacked proper identification.

Video shows Christian first taking issue with store employee Mohammad, who informs him that he needs a state identification or a driver's license so the store can run a credit check on him, part of the company's process in establishing new accounts. Christian takes issue with this, saying that a social security card is all that's required and that a picture ID isn't necessary.

​With his temper steadily on the rise, Christian then begins explaining that his phone carrier is T-Mobile and not AT&T because he "doesn't like dealing with peons who don't know their place." He later demands the store manager be called and makes note that he isn't being rude, stressing that the employee hasn't "seen rude yet."

But then, just as it seems that Christian is done and heading out of the store, he turns around and asks the employee his name, which doesn't sit right with him. "What's your name? Mo? What the f**k kind of name is that? What your actual real name?".

​It was at that moment that the unidentified AT&T customer who was recording the entire encounter chimed in, which also didn't sit well with Christian. "You know what? I don't really give a f**k what some b***h has to say," he said.

"I really don't give a s**t about some goddamn Arab that I been killing their goddamn kind for f**king six months… almost actually two years," he continued. "Six months in the last country I was in, cause people like this are the reason our country is going what it's going to, because I've been killing his kind for longer than you've probably been alive."

When the woman informs him that she's actually 55 years old, Christian tells her "that's cute" before continuing on his rant.

"His kind," Christian says, pointing to Mo. "I've been killing for almost 20 years. I've been on five different continents… I really don't give a s**t about some little peon Arab who actually doesn't belong here."

​The matter eventually comes to a close when the woman informs Christian that she was in line before him, and that she'd reported him to police. Just as Christian walks out of the establishment, he comes face to face with an officer from the Friendswood Police Department, video shows.

Christian was ultimately arrested by the officer. He was charged with public intoxication and disorderly conduct, according to the Houston Chronicle, which noted that he has since posted bail for the misdemeanor offenses. Mohammad told the Chronicle that he was born in Pakistan, but that he's an American citizen who has lived in the US since he was five. "I'm not even Arab," he said.

Mohammad told local news station KTRK that the woman who filmed the incident "was a blessing" because had she not recorded Christian's behavior, "he would have got away free."

"I hope people realize they can't come out like that and have that kind of anger, and that kind of tone with people," he added.