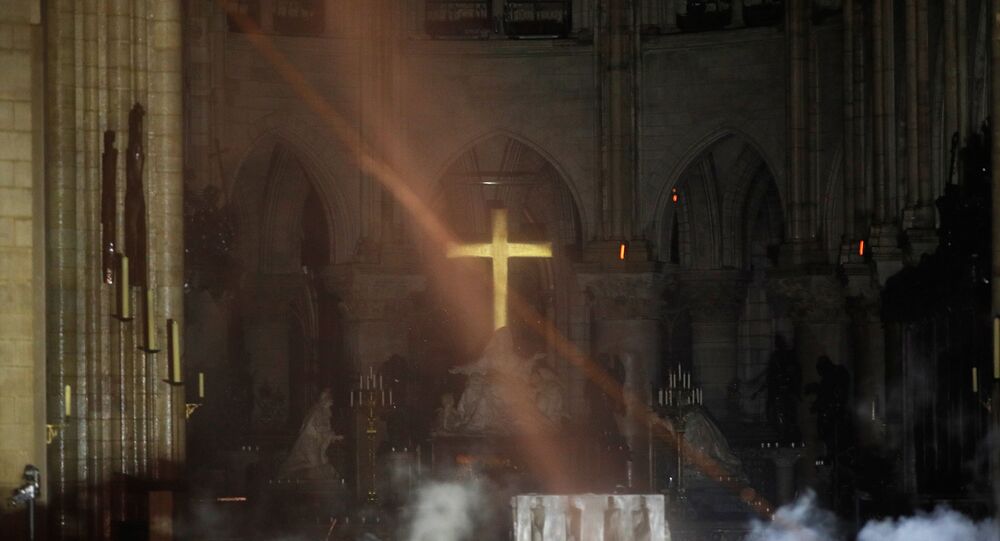 On Monday, a French journalist shared photos of the inside of the Notre Dame Cathedral, revealing that most of the church’s interior had been destroyed, except for the altar and its cross.

Raphaelle Bacqué, a journalist for French newspaper Le Monde, shared the photos on her Twitter account, hours after the medieval Catholic cathedral went up in flames Monday. The fire has since been contained and prevented from spreading to the northern belfry, AP reports.

​"Dear friends," Archbishop of Paris Michel Aupetit tweeted in French Monday. "As we speak, it appears that the towers on the front of Notre Dame are saved. The entire diocese was praying and I have joined the young people who were praying at the fountain of St Michael. Let us stay more united than ever, in hope."

© REUTERS / Philippe Wojazer
Flames and smoke are seen as the interior continues to burn inside the Notre Dame Cathedral in Paris, France, April 16, 2019.

The fire inside the UNESCO World Heritage site reportedly began at around 6:50 p.m. local time, according to the Paris fire department. Media reports indicate that the fire may have been started accidentally during renovation work underway inside the cathedral. Arson and terror-related motives have been ruled out by French law enforcement officials, who are treating the fire as an accident.

On Monday, French President Emmanuel Macron also took to Twitter to express the structure's significance to France and pledge that it would be restored.

"This cathedral Notre-Dame, we will rebuild," he wrote in French on Twitter. "Everyone together. It is a part of our French destiny. I commit to this: from tomorrow a national fundraiser will be launched, and well beyond our borders."

Officials have reported that one firefighter suffered serious injuries while combating the blaze.