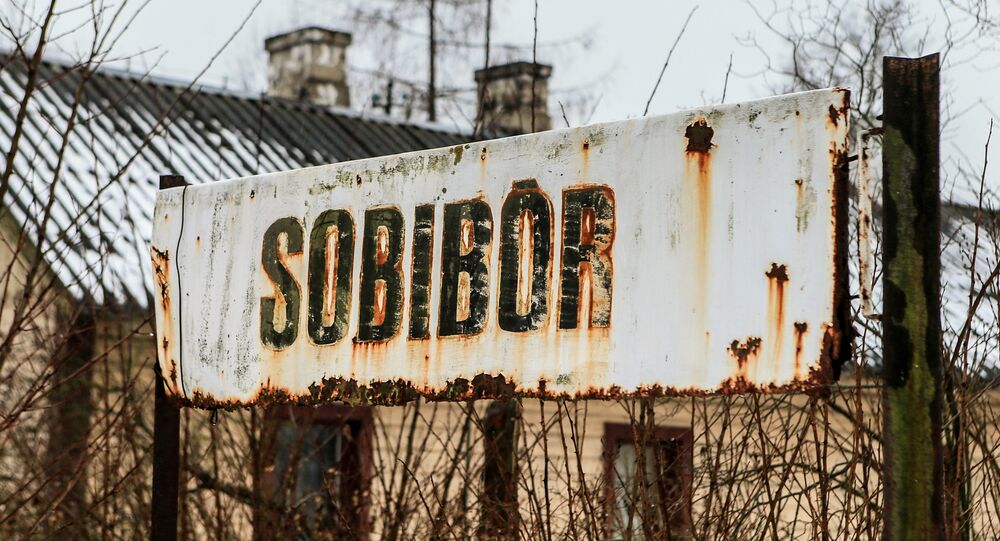 TEL AVIV (Sputnik) - Semjon Rosenfeld is the last known survivor of the Sobibor concentration camp, who has the most reliable information about life in this "death factory".

Rosenfeld told Sputnik how he managed to survive in the concentration camp, what he and the organizer of the only successful revolt in Sobibor, Aleksander Pechersky, had promised each other, and about the things he regretted.

On 11 April, the world annually celebrates the International Day of the liberation of the Prisoners From Nazi Concentration Camps.

"After losing 11 SS-men and security guards, storm of the camp's wire barriers and the mass escape of revolting prisoners in October 1943, the Nazis razed to the ground the territory of Sobibor to conceal their doings, but the events of that time cannot be erased as long as the memories are kept alive", Rosenfeld said.

He remains the only witness to tell about a group of brave people, who found the strength to fight back the German infernal killing machine, in a terrible place where a quarter million European Jews died.

© CC BY-SA 2.5 / Sgvb / Sobibór extermination camp
Russia Summons 3 Ambassadors Over Poland's Sobibor Museum Renovation
Semjon Rosenfeld is 96 years old. He lives in the town of Yad Binyamin in the central district of Israel, near Tel Aviv. His son Michael, who takes care of his father, said that he had grown up hearing family stories about the war, captivity and the victory.

The artillery regiment, where Semjon served, faced the beginning of the Great Patriotic War in Belarus, which was part of the Soviet Union.

"We were breaking out of encirclement with heavy fighting. I was captured, like many fellow soldiers, under [a Belarusian city of] Mogilev, I was kept in a Minsk camp for two years, and in 1943, after the liquidation of the Minsk ghetto, Jewish prisoners were deported to Sobibor, which is located in Poland", Rosenfeld said, starting his story.

A person’s life there lasted no more than a day in average, as most of those who had been brought to the Sobibor were immediately killed in gas chambers.

"By that time, I had already understood that the only way to stay alive longer was to pretend to be some kind of a specialist. And when they called out for woodmen, I made a step forward", he recalled.

Rosenfeld found himself in the same barrack with Pechersky, the organizer of the only successful revolt in Sobibor.

Rosenfeld described him as a man, who was older than many others, as a tall, tough person, who was preparing for the escape.

© CC0
Declassified Nazi Papers REVEAL ‘How to Take Over a Democratic Country’ (PHOTOS)
"Each of the group members had their own mission. I had to eliminate camp commandant Karl Frenzel, I waited for him in the carpentry unit. I did not have to get my hands dirty, as he did not come. But I would have done it in a heartbeat", the former prisoner of the concentration camp continued.

After the rebellion, he was hiding in forests with a small group of fugitives; but when the Soviet troops arrived in the area, Rosenfeld returned to the Red Army in 1944, and took part in the Battle of Berlin.

Later, when archaeological excavations were carried out at the camp site, he regretted that he personally could not show to the seekers the place where two huge cremation chambers were situated and operated, where people were burned; barracks where they were hung between life and death. It is impossible to forget that.

And the man, without whom the revolt would not happen – Aleksander Pechersky – is invisibly present in all of his memories.

"We were able to meet with Sasha [Aleksander Pechersky] only 20 years later, in 1963. Our main fear was that the story of the rebellion and resistance to fascism in its very lair will stay unknown. Unlike, for example, Buchenwald or Auschwitz, nothing was said or written about Sobibor then, but after this meeting, Pechersky and I promised each other that we would do everything we could to let people know about Sobibor", Rosenfeld said.

They started to look for their friends and companions in the resistance throughout the Soviet Union. They found one in the Russian city of Ryazan, another one in Russia’s Sverdlovsk (currently, Yekaterinburg), and the third one in Leningrad (currently, St. Petersburg).

© REUTERS / Michael Dalder
Dachau 'Arbeit Macht Frei' Concentration Camp Gate Returns to Memorial
"We met several times in the Soviet Union while we were younger, but time is taking a toll. One by one, my comrades died. I still regret that I could not say goodbye to my friend Sasha Pechersky, who died in 1990 in [the Russian city of] Rostov-on-Don. I only sent money to his widow", Rosenfeld recalled.

By this time, he had already moved to Israel. Immediately after the repatriation, Rosenfeld handed over all documents related to the extermination camp, as well as numerous tapes of his recorded memories of Sobibor, to the national Holocaust memorial Yad Vashem in Jerusalem. The documents included the names of the heroes, who participated in the revolt, and of the camp torturers, security guards and SS men.

These memories formed the basis of several documentaries about the Sobibor made by filmmakers from different countries, as well as of books.